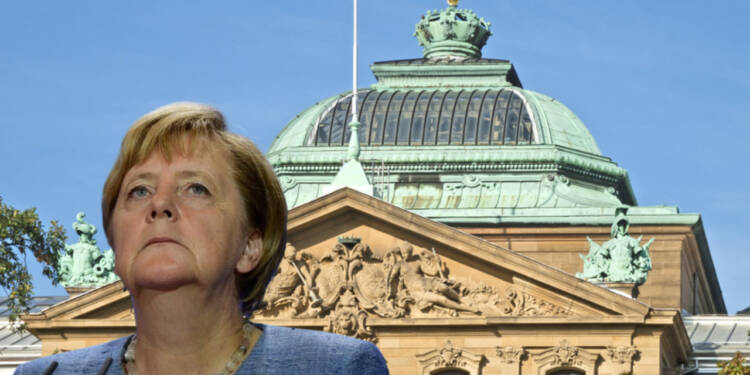 Last week, when Angela Merkel opened her mouth before the media, alarm bells were set ringing in NATO headquarters. Her statements engendered trepidation among Russia hawk elements within the European parliament. Actually, Merkel had called on the EU to soften its policy towards Russia. In an interview, she stated, “Russia and Europe are neighbours and they won’t be able to ignore each other. We have to find a way to co-exist despite all our differences.”

Above that, she also made it clear that Ukraine should not be given NATO membership. According to her deliberation, admitting Ukraine into NATO will only complicate security predicaments in the region. Merkel basically said that Russia is a part of Europe and that the trade relations that Russia and Europe share are of great strategic importance. Obviously, her statements rocked the boat for all pro-Ukrainian leaders and officials within NATO and EU.

Merkel delivering statements that might deem music to Vladimir Putin’s ears, is really a big deal. After all, Merkel led Germany, the biggest economy in the European Union for almost 16 years, and was called the most powerful woman in Europe. She was called the de facto leader of the bloc and dictated the EU’s foreign policy without fail. She is a highly revered political figure across the borders in Europe, whose statements carry weight and the potential to influence public opinion. So, when she came down on Russia’s side in her assessment, it wasn’t less than a gut-wrenching jolt for the EU establishment.

Read More: Merkel has a message for Germany and the rest of Europe, and it makes sense

So, it seems that the EU establishment is now striving to silence Merkel’s pro-Russia voice. Recently, Germany’s Federal Court of Justice (BGH) ruled against former Chancellor Angela Merkel in a two-year-old case. In 2020, Merkel was accused of delivering a political speech during a state visit to South Africa, against the far-right Alternative for Germany (AfD) party.

The court gave the verdict that Merkel’s statements ended up making AfD a political pariah, and violated the AfD’s right to fair political competition. It’s interesting to note that the verdict in this 2020 case against Merkel came out as soon as she delivered statements deemed as anti-Ukraine by the EU. It’s highly likely that this was more than just a coincidence.

During her tenure as German chancellor, Merkel always advocated for strong trade ties with Russia. Her so-called pro-Russia stance was far from unfounded and illogical. Russia and Europe are natural trading partners, and drawing an artificial divisive line between the two would only trigger problems on both ends. It was during her tenure that Nord Stream 1 and Nord Stream 2 pipeline projects were fancied and the first one even became operational. She was the one who hooked Germany and Europe to Russian gas. Some even accuse Merkel ignored Putin’s lurching towards Kleptocracy only because of commercial reasons. But at the end of the day, she got away with it; thanks to the political and economic perks that came flowing with the easy and cheaper Russian energy.

It can be safely said that Merkel is a pain in the neck for all those who want to turn Russia into a pariah state. So, efforts are underway to vaporize her out of the bloc’s political community. A well-timed court ruling against her might do the job, but we can expect her rivals to pile more legal burden on her, to wipe out her contours currently embellishing the EU’s policy-making regime.