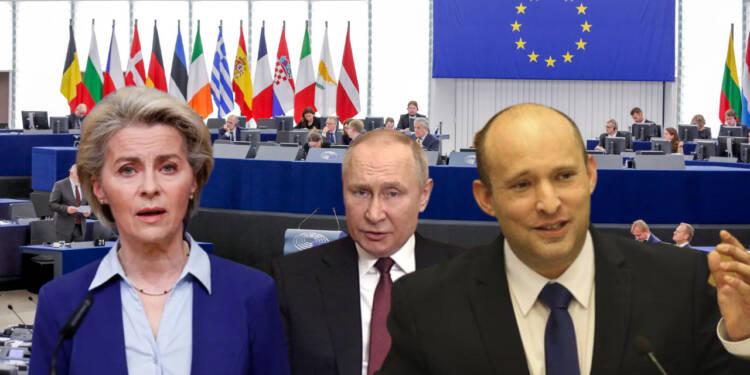 The European Union has been continuously looking for alternatives to overcome the crisis generated by its own foolishness. Till now, the EU was trying its best to avoid meeting Middle East nations, especially Israel as the bloc was quite sentimental against the country over the West Bank issue.

But, a few recent incidents pushed Ursula and Draghi to land in Israel and have a quick chit-chat as Russia and Israel came at odds with each other. For its personal gains, the EU signed deals with Israel for smooth gas and oil supplies.

EU may think it can convince Israel to fight against Russia. But, Israel is a smart player, and the bloc needs to understand that for the short term, the move will give results, but in long term, the trick won’t work.

After a really long break, the EU members officially praised Israel and the EU partnership. European Commission chief Ursula von der Leyen stressed that Israel and Europe are natural partners because of their democratic values and shared past.

If anyone remembers this is the same EU that was constantly criticizing and urging Israel’s actions in West Bank and Palestine. Now that Israel has discovered vast natural gas reserves, the bloc has suddenly decided to be their best friend.

Well, there is another cause behind the EU’s sudden softening against Israel i.e. Russia. Russia and Israel have recently come at par with each other in Syria. The Damascus airport was bombed by Israel and for the first time ever, Russia condemned the Israeli bombing.

Whereas, Russia also attacked Israeli jets in Syria, giving a stern warning to Bennett. This discernment between the two nations motivated the EU to meet Naftali Bennett to go anti-Russia. But, this policy and dream won’t last long.

The premier’s Yamina alliance lost its majority in Israel’s 120-seat Lower house of parliament in April after a member defected. It even spent a few days as a minority administration last month after a left-wing Arab lawmaker defected, but she later returned, and the coalition currently has 60 MPs.

However, the current crisis, which is rooted in one of Israel’s most vulnerable fault lines, could be disastrous for Bennett.

In addition, Bennett’s stepping down as PM will reinforce Netanyahu or Netanyahu-backed leader to the Prime Ministerial position. This will ensure that the Pro-Russian sentiment makes a grand return.

Benjamin Netanyahu had already warned Bennett to take a more guarded approach to the ongoing war in Ukraine and instead focus their attention on the Iran nuclear deal, in his first public statement on the European conflict since Russia invaded its neighbour. But, Bennett for his political gains backed Western allies.

Putin had once described Israel and Russia as “unconditional allies” in “efforts to counter international terrorism”. In fact, most of Israel’s policy towards international matters was somewhat inclined toward Russia.

So for the short term, the EU may forge Bennett to go all guns blazing against Russia. But, once the regime changes, everything will be back to square one.

Read More: Israel is now fed up of Biden and wants to attack Iran all by itself

In addition, Israel’s exact output capacity even after its discovery is nowhere near Europe’s total demand. What if the deals get cancelled as soon as the new government is sworn in?

So, the EU may be looking to Israel because of Bennett’s nuisance with Russia. Eventually, in the long term, the strategy may not work out as Israel has always been pro-Russia.