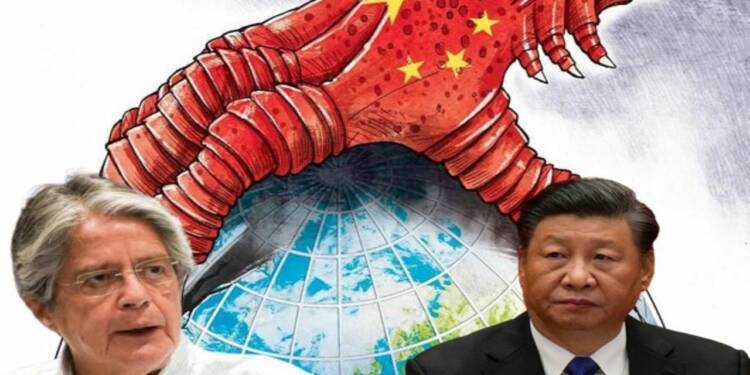 Ecuador’s President Guillermo Lasso is all set to follow the footsteps of his neighbour Pedro Castillo, the President of Peru. Chinese State Councilor and Foreign Minister Wang Yi has recently declared China’s intentions to offer a special partnership with Ecuador under the Belt and Road Initiative (BRI) and to hold a series of dialogues to consolidate cooperation plans.

Lasso intends to become a China-centric nation in South America, something that is bound to anger their mighty neighbour in the North, the United States. China and Ecuador have established strong ties over the years. The possibility of a dedicated FTA ( Free Trade Agreements ) between the countries was solidified with the initiation of negotiations in February this year. Across Latin America, only Peru, Chile and Costa Rica currently have FTAs with China.

China and Ecuador have done considerable bilateral trade over the years with trade volume between the two countries amounting to $10.95 billion in 2021, a 44.5 per cent growth from the previous year.

With growing financial cooperation, it is evident that both the countries are gearing up to counter the influence of the United States in South America. China is on the receiving end of this supposed proposal but what does Ecuador expect out of this equation?

The Ecuador government is looking for places to market their products and benefit from the influx of technological advancements in many concerned sectors like Agriculture and the footwear industry.

“Let’s remember that trade agreements not only involve securing a market but also receiving investment and technology transfer, which is the other interesting part. Logistics have to be improved. And finally, work [must be done] on a competitiveness agenda, that is, to improve productivity,” Felipe Rivadeneira, head of the Ecuadorian Federation of Exporters (Fedexpor) said.

Is Ecuador the Next Peru?

Just like Ecuador, Peru’s new left-wing government, led by President Pedro Castillo, has been fast to extend a welcoming hand to China.

He became a China dove. Castillo’s officials met with the Chinese ambassador and Chinese mining businessmen, shortly after he assumed the office. The officials discussed ways to deepen the previous free trade pact, that was inked in 2009

But Peruvians have never approved of the growing ties between their country and China. They appear to be wary of Chinese tendencies, as evidenced by the numerous protests against the Castillo-led government. These protests are primarily led by copper mine miners who were promised high profits from the sale of copper ore to China by Castillo, but Castillo did not keep his commitments.

Furthermore, the local communities who were removed from their lands for the setting up of the Las Bambas mine have been protesting against the Peruvian government. They are accusing the government of having removed them from their ancestral lands for Chinese interests and are demanding more benefits.

“I am committed to defending our capital and our country,” Lasso said on television.

The powerful Confederation of Indigenous Nationalities of Ecuador, the organization which has called on for the protests, has demanded a slash in the energy prices which the government has rejected.

You see, Ecuador is following the same trend as Peru. Unemployment and protests that are a result of high food and energy inflation have directed the Ecuadorian economy towards a bad phase. The influx of Chinese in Ecuadorian interests could further trigger protests by the local populace. Lasso should probably take a cue from Peru whose decision to allow Chinese interests on its soil didn’t bode well for the country.