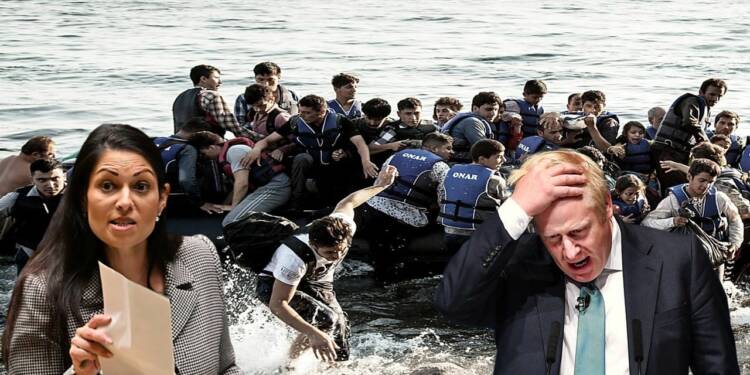 The Boris Johnson administration announced the Rwanda asylum plan in April after the UK signed a deal with Rwanda to send some asylum seekers to the east-African country— a move that Prime Minister Boris Johnson said will “save countless lives” from human trafficking and other issues.

People who arrive in Britain as stowaways in trucks or boats will be flown 6,400 kilometres to Rwanda, where they may be deported permanently. They will be screened for eventual resettlement in Rwanda once they arrive.

“Anyone entering the UK illegally … may now be relocated to Rwanda, “Johnson said, calling the scheme “an “innovative approach, driven by our shared humanitarian impulse and made possible by Brexit freedoms”.

This UK-Rwanda deal however isn’t quite popular with the refugee and the human rights organization, who believe that this move could prove to be quite inhumane and expensive.

Seven people were to be deported from London’s Heathrow Airport to Kigali, Rwanda’s capital, for asylum processing —the first deportations under Britain’s highly unique and divisive new refugee policy.

Several human rights organisations have criticised the policy. The UNHCR has expressed “strong opposition and concerns for the United Kingdom’s plan to export its asylum obligations and urged the UK to refrain from transferring asylum seekers and refugees to Rwanda for asylum processing.”

In the judgment, Lord Justice Singh said the High Court “produced a detailed and careful judgment which is all the more impressive in view of the time constraints.” Singh concluded that he could not interfere with the original “clear and detailed” judgement and refused permission for further appeal. A full hearing on the legality of the policy is due to take place in July.

You see, the UK in its bid to send asylum seekers to Rwanda has been portraying the east-African nation as a safe haven. But is it really that safe? The United Kingdom’s portrayal of Rwanda has already faced strong opposition from critics, who point to the African country’s poor record on political and media freedoms.

Michela Wrong, a journalist and author who has worked extensively in the region, accused both the Rwandan and British governments of “breathtaking” hypocrisy.

“On the one hand you have Rwanda opening its arms to refugees and being relentlessly hyped as a safe haven by Home Secretary Priti Patel and Prime Minister Boris Johnson; on the other hand, you have a rebel group which has always been regarded as a Rwandan proxy going on the attack and sending tens of thousands of villagers fleeing their homes in Congo and Uganda in the space of a few weeks. It’s jaw-dropping,” she said.

Senior members of the UK’s opposition party have condemned the administration for sending the helpless refugees to an economically backward, conflict-ridden country.

The Democratic Republic of Congo and its army have repeatedly accused their neighbour Rwanda of supporting, financing and arming the rebel group ‘M-23’.

The fight between the M-23 rebel group and the army has intensified in the last few weeks. The army and the administration of Congo have accused the group of repeatedly disrespecting Congo’s territorial integrity.

You see, the Congo-Rwanda war ended in the early 2000s, but the violence and brutality have continued in the Eastern Congo leading to thousands of deaths in the region. To paint a country with a history of human rights violations as a ‘safe haven’ surely raises questions.

Despite objections and concerns from multiple fronts, the UK is hellbent on going ahead with the deal.

Speaking in the Commons, Home Secretary Priti Patel defended the policy and said the court ruling was “disappointing and surprising”.

“We believe that we are fully compliant with our domestic and international obligations, and preparations for our future flights and the next flights have already begun.”

She further added, “We will not stand idly by and let organized crime gangs, who are despicable in their nature and their conduct, evil people, treat human beings as cargo.

“We will not accept that we have no right to control our borders”, she said, explaining that the government has been reforming its systems to make them “firm” and “fair”.

The UK is creating a rosy picture of Rwanda in its bid to dump the asylum seekers into the hell-hole, amidst the shocking details of the grave situation in the East-African country. Boris Johnson has a lot to answer.