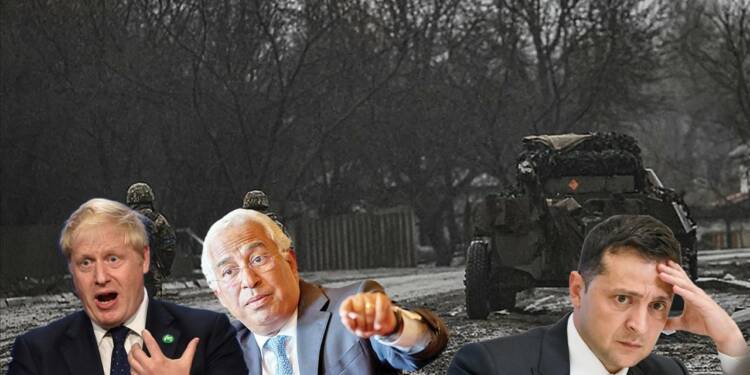 Europe has been taken by surprise by the extent of Russian resilience in the face of NATO’s aggression. NATO countries have been on a spree of supporting Ukraine by supplying Zelensky with billions of dollars and modern weaponry to help Ukraine prolong the war with Russia.

“Yes, they’ve talked about… starting to get to… what we would describe as the back of the cupboard, where they reach in and discover that they’ve given a tremendous amount of equipment [to Kiev] in recent weeks and months,” US Permanent Representative to NATO Julianne Smith said.

During a surprise visit to Kyiv, Johnson declared his support to Ukraine but not directly it seems. The UK is possibly following in the footsteps of their southern neighbor France whose president Macron understands the value of ties with Moscow.

The Prime Minister said: “The UK is with you, and we will be with you until you ultimately prevail.

Portugal Takes A Step Back

Portugal is ready to train Ukrainian soldiers but sending more military material is not on the table, defense minister Helena Carreiras said at a NATO meeting in Brussels.

Portugal authorities however have declared no intent of demand from the Ukranians but they feel like a demand would be inevitable. To clarify things, Portugal has already put a full stop on any hopes the Ukranians might have been fostering.

Read More: “No place for Ukraine in the EU,” Macron announces it loud and clear

Russia’s neighbor and NATO member Norway is feeling quite anxious amidst the rising status of Moscow in the world and is now trying to be in the good books of Putin. Norway, owing to its membership in NATO has proposed “Training” to the Ukrainians. But Minister of Defense Bjørn Arild Gram understands the limited impact their training could have against the professional Russian force. It would be like a sheep sent to the slaughterhouse.

Major European powers are dialing back on their efforts to counter what they call Putin’s aggression. The French president has also previously suggested cutting back the support to Ukraine to direct the resources into creating security arrangements for the European Union. With global powers isolating their support to Ukraine, it is now up to Zelensky to decide how long he wants to fight against an inevitable loss.