“No place for Ukraine in the EU,” Macron announces it loud and clear 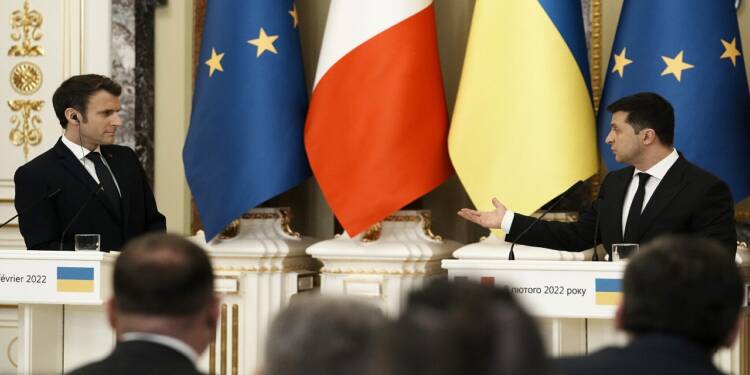 French President Emmanuel Macron has effectively dashed Ukraine’s hopes of joining the European Union. He has announced that it would take “decades” for a country like Ukraine to join the EU and suggested building a broader European political club that would also include Britain.

No quick entry for Ukraine

Joining the EU is no easy process. Poland made a formal request to join the EU in 1994 and was admitted to the bloc in 2004.

Countries like Albania, Bosnia, and Serbia have been already waiting for several years to join the EU. The process involves initial approval by the European Commission, followed by unanimous approval by the 27 EU member countries.

Even after that, the country wishing to join the EU is required to introduce political reforms and bring its judicial setup, economy, and political system in line with the EU standards. The applicant country also has to adopt E.U.’s system of common law and 80,000 pages of rules and regulations on different subjects like environmental standards and food hygiene.

Ukraine, on its part, was looking for a fast-track process given its ongoing war with Russia. It felt that the EU had an obligation to fast-tracking its application.

Read more: Europeans are now mincing no words in loathing Biden for starting the Russia-Ukraine war

Yet, Macron is being honest with Ukraine. He said that even if given a formal EU candidate status, it would take Ukraine years or “several decades” to become a part of the Brussels-based bloc.

Macron added, “And that is the truth unless we decide to lower the standards for accession and rethink the unity of our Europe, and also partially the principles that we hold.”

Macron has therefore proposed a new idea for Ukraine. He wants to create a “European political community”.

The French President said, “The EU, given its level of integration and ambition, cannot in the short term be the only way to structure the European continent.”

He gave a similar offer to Britain. Macron said, “The United Kingdom decided to leave our European Union but it can have a place in this political community.”

He however pointed out that the countries which are now close to completing the process of joining the EU “should go to the end of this road”.

The idea became an instant hit with German Chancellor Olaf Scholz. He described Macron’s proposal as a “very interesting suggestion” and said that he was “very pleased” to discuss it with the French President.

One thing is clear- both Macron and Scholz are keen on ensuring that Ukraine is not allowed to join the EU. This is why they are openly telling Zelenskyy that it will take you too long to join the EU, so let’s create a wider bloc and you can join it.

But why are they so keen on keeping Ukraine away from the EU? Well, to put it precisely, the EU is a very closely held organization. Today, it is somewhat fractured with countries like Italy seeming disillusioned with the bloc but at a structural level, it is perhaps the most integrated of all regional blocs in the world.

If France or Germany end up accepting such a high level of integration with Ukraine, they might end up provoking Putin. And despite all their token statements supporting Ukraine, neither Scholz nor Macron can afford to irk Putin. They know that rubbing Russia the wrong way will immediately lead to even higher fuel and gas prices, and a further spike in inflation.

They are therefore consciously avoiding Ukraine’s admission to the EU. In fact, they are giving a soft signal to Moscow about how they are not keen on letting Ukraine join the Brussels-based bloc. Yes, they are ready to create a wider bloc. But who knows if it will actually come up. And even if it does come into being, the bloc will definitely not be as closely integrated as the European Union.

The message to Ukraine is thus loud and clear- you have no place in the European Union.