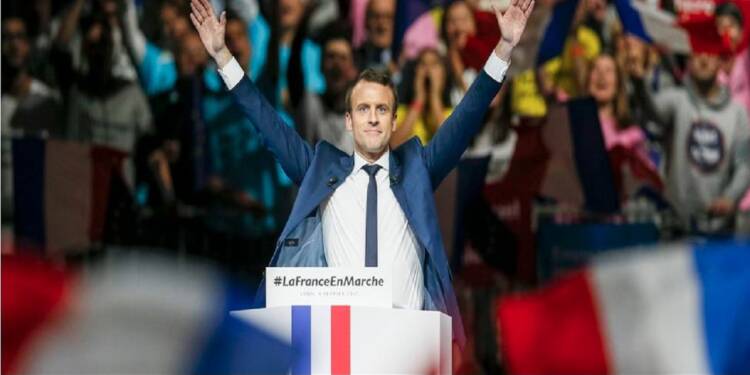 Emmanuel Macron has become the President of France for the second consecutive time. This makes him the tallest leader within the European Union. But it wasn’t as if he stamped his authority over the election.
Make no mistake; the election was tightly poised with Marine Le Pen making significant inroads ahead of the second round of the elections. However, Macron’s tactic of tapping into center-left voters helped him win the crucial polls.

Read more: For French Muslims, the choice is between the bad and the worst

In 2017 too, Macron had managed to defeat his biggest rival, Marine Le Pen. On Sunday too, he managed to defeat Le Pen. As per France’s Ministry of Interior website, Macron received 58.5 percent of the vote against Le Pen’s 41.5 percent. In 2017, the margin was bigger from 66.1 percent to 33.9 percent.

Marine Le Pen was giving a stiff challenge to Macron. She was tapping into the right and far-right vote in France, which made her a fierce competitor for Macron. Some of the surveys were also predicting a very thin majority for Macron and it seemed that an upset could be on the cards.

Tapping into the Centre-left vote

Macron did something remarkable ahead of the second round of French elections. He knew that he and Marine Le Pen were both contesting for the center-right and far-right voters. This could have led to a division of votes and then the elections could have gone either way.

However, it was at this time that Macron decided to tap into center-left voters. Even after being re-elected, Macron said, “To those who voted for me, not to support my ideas but to block those of the extreme right, your vote obliges me. This evening, I am no longer the candidate of one camp, but the President of all.” So, he effectively used the ‘President for all’ narrative to soothe voter sentiment and tap into all sections of the French electorate.

As a part of his ‘President for all’ narrative, Macron brought up some policies that appealed to the center-left voters. He used climate change to attack Marine Le Pen, described her as a “climate skeptic” and asked the liberal voters to make a “civilizational choice”. While addressing a large rally, Macron said, “The choice today is clear. The far-right is a climate-skeptic project, a project that wants to leave Europe’s climate ambitions, that wants to destroy windmills.”

For the liberal voters and climate vigilante, Macron became the lesser of two evils. Even on issues like secularism and tighter integration with the EU, Macron seemed a better choice for liberal voters when compared to Le Pen. Make no mistake, many of these voters hate Macron for his no-nonsense approach as the French President and his zeal for making France the most powerful country in Europe. However, they simply didn’t have a choice but to vote for Macron.

Pollsters Ifop found something surprising on the election day. A survey asked voters how their preferences changed between the first and second rounds. It was found that Jean-Luc Mélenchon’s supporters during the first round had shifted their loyalty towards Macron. Mélenchon represented the center-left spectrum during the first round of polling in France. However, Mélenchon had lost to far-right Marie Le Pen and centrist Emmanuel Macron in the first round by a sizeable margin.

45% of those who voted for Mélenchon in the first round said that they won’t vote in the second round. More importantly, 42% of Mélenchon’s voters said that they will vote for Macron. So, some of the center-left voters went to Macron and Marie Le Pen remained more or less deprived of that section of French voters.

And this is how Macron ensured that he won the French Presidential polls, despite facing a scare of losing.