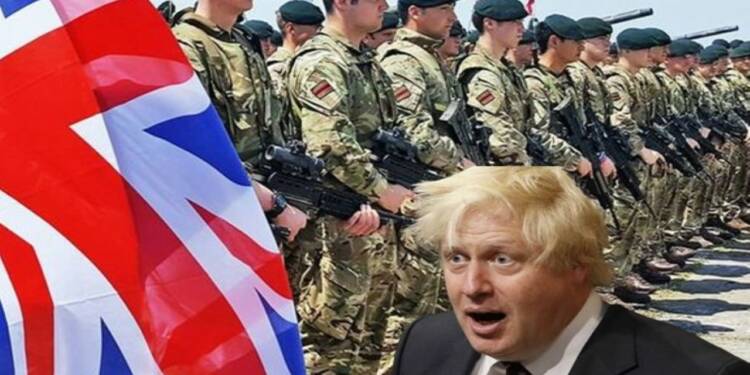 One of the most highly regarded and best-equipped armies in the world, the British Army is proud of its heritage of delivering success in combat through the courage and absolute commitment of its soldiers. Though the army has not even fired a single bullet in Ukraine, it’s still “brave”.

Recently, the new commander of the UK army, General Sir Patrick Sanders, asserted that British troops must be ready “to fight in Europe once again in world war 3”, as Ukraine‘s soldiers are struggling to hold the line against Russia‘s troops’ advances in the eastern Donbas region.

British Navy i.e. also known as ‘Royal Navy’ has recently debunked, what the brave United Kingdom has exactly become in the aftermath of the Ukraine War. The army may not have fired a single shot in the war. Yet, the armaments and defence have taken a toll.

UK is now a weak nation

Head of the British armed forces, Tony Radakin has stated that the United Kingdom has taken a deep toll on its weapon stockpile, it may take years to rebuild the stocks to the level before the Ukraine war.

The pressure of low stockpile is so intense that Lord West, the former head of the Royal Navy has called for PM Boris Johnson to start producing weapons “almost on a 24/7 basis.” as UK’s weapons stockpile is “insufficient”

Tony Radakin furthermore stresses that the “rate of expenditure” of weapons in Ukraine and the “industrial capacity to backfill” is becoming “a significant issue”. You see, the United Kingdom is supplying help to Ukraine without even considering its own interests first.

Just last month, the UK government pledged £1.3 billion ($1.6 billion) worth of further military support to Ukraine. The nation has been Ukraine’s most important ally in the country’s resistance against the Russian invasion. Also, it was the first European country to send lethal aid to Ukraine and continues to do so.

But, everything comes at a cost and the cost for the UK is a weakened military.

The United Kingdom’s Defense minister Leo Docherty told the House of Commons precisely about the exact supplies given to Ukraine. As per him, the UK had sent Ukraine “6,900 anti-tank missiles, five air defence systems including Starstreak anti-air missiles, 120 armoured fighting vehicles … and 1,360 anti-structures munitions, 4.5 tonnes of plastic explosives, and 400,000 rounds of small-arms ammunition.”

This is a huge number. But, replacing these weapons has now become a concern for the United Kingdom.

The UK army was getting weakened already and concerns were being raised over it. This war has just made things worse for Boris Johnson. The size of the British army was continuously falling over the last decade and there is no stopping it. In addition, the British Army was already in the process of being cut to 72,500 – its lowest since the Napoleonic Wars.

Moreover, the Royal Navy lacks a sufficient number of operational warships and the Royal Air Force is also short of fast jets. So, there is not even a single field where the UK is performing well.

Now, this revelation of depleting weapon stockpile indicates one thing, that the UK military will be in no position to defend its own country if it is attacked in near future.

On one hand, the UK wants to prepare to fight for WW3. But if today someone attacks the United Kingdom, the island nation will even fall short of bullets to shoot down enemies. This is what blind help could do to the nation.