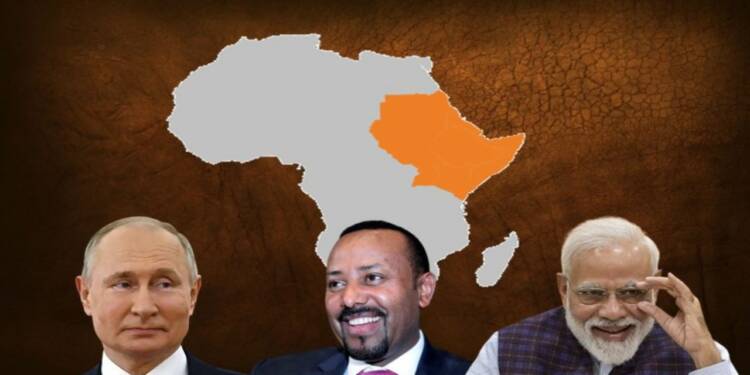 It is a well-written fact that African nations are becoming more and more anti-West in recent times as the globe heads towards a multipolar world. This is already providing an avenue for Russia and other nations to fill up the space.

When it comes to Ethiopia, the nation has always believed that a multipolar world could benefit the African continent. But, the US has always been reluctant. It wants to control the Horn of Africa due to its tremendous potential of resources and strategic location.

You see, Ethiopia is very hesitant to turn Africa into the dominance of one single country. It knows the development of Africa requires multiple investments from multiple actors. This is precisely why at the recently held BRICS+, Ethiopia called for various nations to invest in the Horn of Africa.

India and Russia in Horn of Africa

A few days ago, Ethiopian Prime Minister Abiy Ahmed attended the BRICS+ summit virtually alongside a dozen other countries. The sole purpose of this summit was to develop a truly democratic multipolar world order based on the principles of equality, justice and mutual respect where global trade and finance are free from obstacles of Western propaganda.

See, Ethiopia isn’t a part of BRICS. But, it has a close strategic partnership with BRICS countries, especially Russia and India. The nation wants to expand this multipolar integration platform’s role to the Horn of Africa and for this, both Moscow and New Delhi are imperative.

The Horn of Africa strategically has an important place for the world. It is the entry point to the Suez Canal and a fulcrum of international geopolitics. Any bad event in the Horn of Africa has direct consequences for the safety and future of all seaports on the Red Sea as well as on the national security of the Persian Gulf.

Furthermore, India also has strategic interests in the region. The Indian Ocean Region and Africa are important to India’s foreign policy. Hence, discussion on bilateral cooperation including education, health, investment, and development partnership happens in this region on a constant basis.

The Downfall of the US

Ethiopia has been historically anti-imperialistic and Pan-African. It had boasted one of the world’s fastest growth rates prior to the pandemic. This made Ethiopia a leader of the African Union.

But, its belief in a multipolar world emerged after it got victimized during the TPLF-led Hybrid War of Terror. You see, President Abiy Ahmed of Ethiopia has repeatedly slammed the United States citing them as responsible for the TPLF reign of terror.

In addition, African people also find India and Russia better than the United States in terms of the partnership. This is why Ethiopia recently praised Russia’s financial multipolarity platform and has started to thwart any attempts of Western dominance.

Ethiopia’s call to the BRICS+ summit is a positive step in this direction and confirms that a multipolar region is arriving soon. Make no mistake, in Ethiopia’s multipolar world, the US won’t be welcomed at all. In addition, Ethiopia’s call for BRICS nations in general and Russia and India, in particular, to invest in Africa could prove to be a life-changing move for the continent. Make no mistake, the end of Western imperialism in Africa has begun.

Czech missiles and armaments worth billions go missing in Ukraine