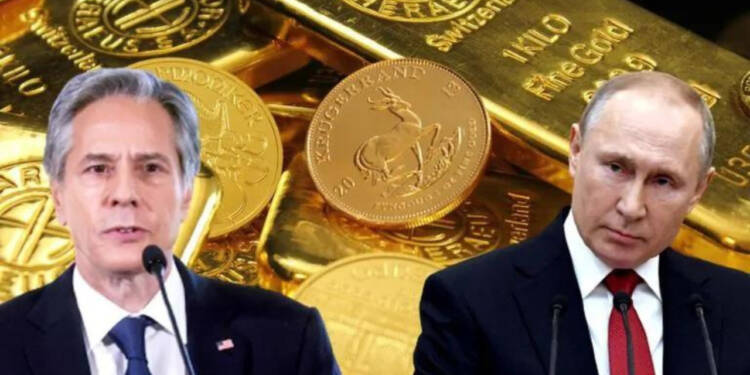 The G7 summit commenced on the 26th of June. As the leaders of the world’s wealthiest nations assembled in the Bavarian Alps, the most common theme discussed amongst these nations was Russian sanctions.

It is an undeniable fact that the Russian economy despite being sanctioned, has performed well, and Russian oil revenues have set huge records. Furthermore, the ruble hit a seven-year high against the dollar recently.

Gold has recently become the center of attention for both the West and Russia. As the Russian economy continues to perform well, the US brought up a fresh plan at the G7 summit to restrict Russian gold exports to all other G7 countries. While this action is being painted as a big one, in reality, it’s not.

The Nations do not purchase that much gold

As the G7 pledged to restrict its purchase of Russian Gold, The US Secretary of State, Anthony Blinken praised the motion and insisted that the Gold ban will cost Russia approximately $19 billion.

As per Blinken, Gold is the second most lucrative export that Russia has after energy. It’s about $19 billion per year, and most of that is within the G7 countries. Cutting that off, denying access to about $19 billion of revenue a year, that’s significant.”

But, is this statement of Blinken actually correct?

No is the answer

A point to note here is that the flow of gold from Russia has already been restricted by sanctions. This new move by the G7 would be having no new significant impact.

Note that the G7, except for the United Kingdom is nowhere near the actual purchaser of Russian gold. In 2020, the main destination of Gold exports from Russia was Switzerland, India, the UK, the US, China, Italy, and Turkey.

Switzerland is a neutral country and is expected not to join the G7 diktat, and we all know on which side China and India are, with respect to following US-led sanctions. And the countries like UK and US cannot even bypass the imports of Switzerland even if combined.

Furthermore, even after G7 bars gold purchases in their nation, Russia would be able to sell its gold to refineries or to customers like in China, India, or the Middle East.

Even the analysts across the globe also pitch that the move is just a toothless tiger and it would have no significant impact on Russia.

As the motion was passed at the G7 summit, the UK government said in a statement that, “this measure will have global reach, shutting the commodity out of formal international market”. But, the London Bullion Market Association chastised this statement as soon as it came.

Furthermore, the most common argument given by most of the analysts worldwide is that “the impact from a ban on Russian gold imports by G-7 nations is likely to be fairly limited, as the industry has already taken steps to restrict Russian gold, a ban also just formalizes what has largely been in place via sanctions”

So, when you don’t purchase Russian gold to that extent and there are other countries that can buy Russian gold, the ban is nothing but a policy disaster of epic proportions.

The US once stated that sanctions will collapse the Russian economy, but this doesn’t appear to be the case.

With this ban, now it believes that restricting the purchase of gold will be an ‘attack on the heart of Russia’. But, how exactly will Russia suffer a loss of $19 Billion at a moment when Western sanctions appear to be not effective is a thing only these Western nations can imagine.