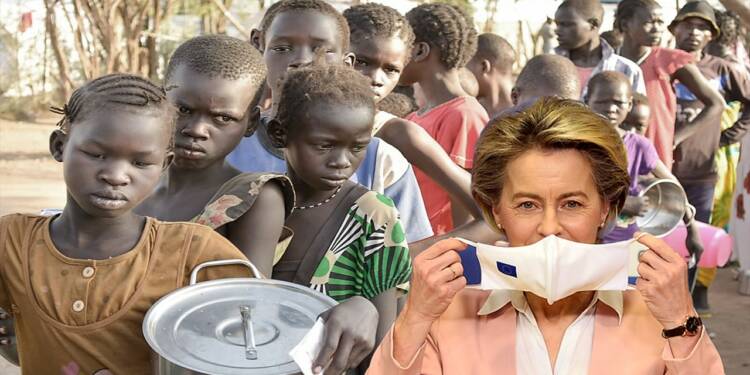 The continent of Africa is grappling with an episode of famine and deprivation due to the Russia-Ukraine conflict. The continent hosts 60% of the world’s arable land, and in spite of that it, is the largest importer of food. But now Russia’s invasion of Ukraine threatens to plunge the continent into a fresh disaster. The countries in Africa are dependent on Russia and Ukraine for their wheat imports and also for fertilisers. West Africa is the worst hit by the food crisis.

The blockade has led the people in the horn of Africa to starve. This has compelled the people in impoverished countries to flee their homes in the wake of evading the food crisis leading to starvation and malnutrition. Africa is seeing a hike in prices of food grains and fertilisers due to the blocked exports from foreign countries.

Ever since the war began, the EU and the West have been holding Russia accountable for the ensuing food crisis in Africa. They have been advising Africa to side with the West. However, Africa, who has been anti-West for long, hasn’t supported the EU and the West in sanctioning Russia. Now, the EU is playing smart by hitting the rod when it is hot. The European Union is suggesting the African Union to blame Putin for the ensuing food crisis and to cooperate with the EU to increase its production. But Africa, who is always on Russia’s side seems obstinate to accept the offer.

Read more: Putin might end up winning Africa also, as a result of the Ukraine war

Food and fertiliser crisis of Africa is acute and fertiliser shortage will harm Africa’s harvest next year. The EU for weeks was trying to win Africa in its favour by offering fresh funds to its poorer neighbours in Africa and the Middle East while trying to convince them that the EU is not to be blamed for the sanctions that it has imposed against Russia for the food crisis.

The leaders at the EU summit came up with an initiative that would decrease Africa’s dependency on Russian fertilisers. The EU was planning to help them develop their own fertiliser plants. But at a meeting with the EU envoys, the plan got dashed as the EU envoys unreservedly opposed the text. Now, the EU has a different say over it. The EU believes that promoting the development of fertiliser plants in Africa and the Middle East will compete against the overarching objective of the EU’s Green Deal. The EU aims to become the first climate neutral continent by 2050, resulting in a cleaner environment.

The EU convinces the Russo-Ukraine war affected countries not to blame its sanctions for the food crisis but in reality, it is orchestrating the crisis by not letting the countries to even attain self-efficacy to combat the crisis. European countries themselves are heavily consuming gas, oil, coal etc. Even Germany is examining fracking as an option but when it comes to Africa they have a valid reason to give. The Green Goals.

Read More:  After kicking Biden out, Ethiopia invites India and Russia to the Horn of Africa

According to authorities, the Commission requested states to revise the text so that it simply made reference to a strategy for promoting fertiliser alternatives or more effective fertiliser use. The Commission was unable to respond at this time.

The EU is insinuating the African countries to find viable alternatives for fertilisers but not letting the continent to develop its own plants. This move will lead to an excessive fertiliser shortage in the coming times and will completely destroy the continent’s agriculture industry. This is only going to exacerbate the hunger and food crisis in Africa.