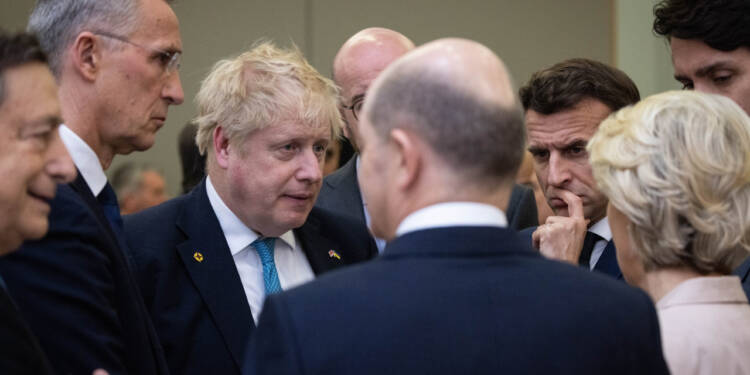 The unipolar era of USA’s supreme power has ended under its current President Joe Biden. Emerging powers like China and India have developed tremendous capabilities to make the international settings increasingly multipolar with the presence of various power blocs. Alliances with like-minded ideologies and strategic partners will in fact ensure a healthy balance of power across the globe.

Western powers’ expectations of the effects of their sanctions on the Russian economy have not come true. The Russian economy, however, did struggle a bit in the beginning after the gigantic crash of its indigenous currency “The ruble”, but was able to repair its fort fastly and undo damage owing to its very strong commodity trade.

G7 countries proclaim themselves to be highly advanced economies that have the capabilities to strangle any world economy if required by the means of collective sanctions. However, the collective effort of the G7 countries that hold approximately a 31.09% share in total global GDP was not able to crush or even significantly hinder the finances of Moscow. The inability of these “Modern Economies” hints toward the inefficiency of their leaders and financial systems.

The West has taken notice of the changing polarities around the globe and is on a spree to woo other influential democratic nations to gather support for its war against Russia. The big seven after admitting their defeat in the face of Russian resilience took on a new course of block politics at the recent G7 summit.

German chancellor Olaf Scholz invited five of the biggest non-Western democracies to this year’s G7 summit in the Bavarian town of Elmau as observer states. In a joint declaration, the G7 and the heads of state of India, Indonesia, Senegal, South Africa, and Argentina announced a close collaboration to strengthen the resilience of democracies amid rising uncertainties and multiple crises.

The observer states are probably expected to build up international pressure against Moscow. However, the majority of the countries on the list have close ties with Russia and would probably not change their stand just because big old Joe asked them nicely.

South Africa and India are part of the powerful BRICS alliance along with Brazil, China, and Russia. The EU and India are looking forward to a trade agreement by 2024 and that must be the only reason Modi accepted the invitation. New Delhi has been a neutral party in the crisis but has shown its support to the Russian side by abstaining in the UN vote and purchasing crude oil amid sanctions.

Africa also abstained in a vote in the United Nations General Assembly on the resolution condemning the Russian invasion of Ukraine, and demanding their withdrawal. President Cyril Ramaphosa’s decision can be explained by the long-lasting support provided by former Soviet rule to the majority in SA.

Senegal, an African nation, has also expressed solidarity toward Moscow amid Putin’s promise to facilitate grain exports. “President Putin has expressed to us his willingness to facilitate the export of Ukrainian cereals,” Senegal’s President Macky Sall wrote on Twitter after meeting Putin in his role as chairman of the African Union.

Strong support for Russia among Indonesian nationals could also be analyzed on social media platforms. Also, Argentina’s Foreign Minister Santiago Cafiero said the Latin American country will not sanction Russia amid its continued war with Ukraine.

“Argentina does not consider that they are a mechanism to generate peace and harmony, or generate a frank dialogue table that serves to save lives,” Cafiero told reporters at the presidential building, the Casa Rosada.

It does look like the G7 countries after all is not as powerful as they believe. The inability to influence nations despite controlling almost ⅓ of world finances is a prime example of poor leadership at home.