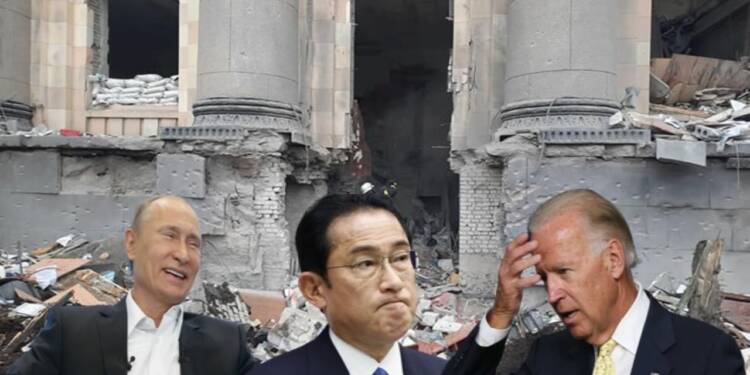 The much anticipated G7 summit whose major agenda this year was to curb Russia’s economic prowess have finally been happening, but are not yielding results as expected.

The G7 (Group of Seven) is an organization of the world’s seven largest self-acclaimed modern economies, which supposedly have a powerful grip on world trade and on powerful financial institutions. They are Canada, France, Germany, Italy, Japan, the UK and the United States. The group previously known as G8 was reduced to seven nations when its former member Russia was removed due to its “aggression” on Crimea in 2014.

The 48th G7 summit took place from 26th June – 28th June in Schloss Elmau, Krün, Bavarian Alps, Germany. This was advertised as being one of the most important summits yet for Biden and his minions.

The recent summit also witnessed the presence of leaders like the Indian PM Narendra Modi, whose bold, independent and neutral stance on the Russo-Ukraine war didn’t bold well for the condescending Western leaders. You see, the German Chancellor’s invitation to Modi to attend the G7 summit must have been to align India’s stand against Russia amid the ongoing crisis after India abstained from voting against Moscow at the UN

What was the narrative that you were being served by the likes of Joe Biden and other Western leaders when the Ukraine war started? Well, you were being told that Russia would be flooded with tough sanctions and ultimately, the Russian economy will be damaged beyond repair as a consequence of invading Ukraine.

However, Putin has carried through his military operation in Ukraine without any significant problems. In fact, he has signed some grand economic pacts with some major economies despite Western sanctions.

Make no mistake, the Western nations tried every trick in their books to devastate Russia’s economic stronghold by isolating the nation. Biden at least wants his strategic allies to step up and impose restrictions on their indigenous companies to leave operations in Russia.

However, the reality has been unfolding differently for the 79-year-old president.

The severe underperformer on Biden’s list should be one of his most strategic allies —Japan. Tokyo has really not been able to tone down the Pro-Russian narrative from the minds of its companies or well maybe, Fumio Kishida, the Japanese Pm, does not want that to happen.

Read More: Japan makes it clear that it will not compromise with its “ASSETS” in Russia

Companies Looking For Their Interests

Former PM Shinzo Abe must have had a better hold on the politics of his country than his successor Fumio Kishida. A couple of years ago amid the severe backlash faced by China on the International forum due to its negligence on the spread of COVID-19, many countries halted or toned down operations in China. One of the forerunners among those was  Japanese PM Abe who told Tokyo’s indigenous companies to pack up and leave China as a sign of protest. Moscow became a reliant alternative for these companies

Now, these companies are looking for their interests and are not leaving the huge Russian market. Less than 3 per cent of Japanese companies operating in Russia have decided to withdraw following its invasion of Ukraine, the lowest proportion among the Group of Seven nations, a recent survey showed.

Read More: Japan blows up its own energy, EV, and paper industry to harm Russia

The survey further showed that most Japanese companies were reluctant to quit operations in Russia and have plans to enter back into the market once things cool down. Only 4, or 2.4 per cent, of the 168 Japanese companies operating in Russia had decided by June 19 to cease business in the country, according to an analysis by Teikoku Databank Ltd. based on the survey conducted by the Yale School of Management in the United States covering around 1,300 major companies worldwide.

Quitting the Russian market is indeed a difficult bet for the enterprises which are getting squashed by the West’s propaganda war against Russia. Western countries have not been getting much success with companies from the USA, UK and Canada also not being able to halt operations in Russia completely. There was no doubt that the Western sanctions have failed miserably. The recent survey only vindicates this further.