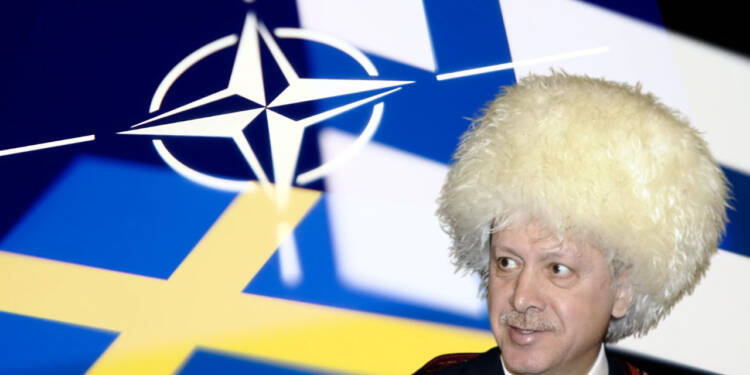 High spirits sifted through Madrid as NATO conducted its summit to discuss the legwork needed for countering Russian intrusion. The ‘high spirits’, as mentioned earlier was just NATO celebrating Turkey’s official stance on taking back the veto it imposed on both Sweden and Finland joining NATO.

It reverberated all through the media on how the Nordic countries goes an inch closer to joining the trans-Atlantic alliance. But the promising deed from Turkey is just a mishmash of things as Turkish president Erdogan knows that the high spirits that NATO revels in only have a short lifespan.

Back in the times when Turkey opposed the Nordic countries joining NATO, it surprised many. But now when Ankara diligently lifted the veto on the Nordic countries, the erstwhile surprise is not to be seen. NATO is jumping with glee while other allies of the US-led military bloc are full-on praising Turkey for braving this move against Russia. Even Boris Johnson and Joe Biden were seen sharing guffaws with a stolid Erdogan in Madrid. But Turkey’s current project is a well-designed one with Ankara having prescient knowing that the Nordic countries will never join NATO.

NATO’s accession process is a long walk. It will take several months for any country to join NATO even after the bid is formally accepted by the authorities.

“The process will still take several months, and NATO as an institution will accept their applications at their summit at the end of June in Madrid. But then, every existing NATO member state must ratify Sweden and Finland’s membership application,” noted Alistair Shepherd, senior lecturer in European Security at Aberystwyth University.

“This will take some time and will vary depending on the rules in each member state. It is likely to be late 2022 at the earliest when this is complete,” he added.

Here comes the crux behind Ankara’s dramatic shift in pulling back the veto against the Nordic countries. Sweden is preparing for general elections in September 2022. Incumbent Prime Minister Magdalena Andersson has struggled repeatedly to be in the good books of the populace as the government seems more concerned with the global issue than meeting the domestic concerns of the public.

True to this, a pre-poll survey has found that Sweden’s four right-wing parties have taken a slim lead over the left-of-centre bloc in a new poll, after the Liberal Party edged over the parliamentary threshold.

With just three months to go before the election on September 11th, the Moderates, Christian Democrats, Sweden Democrats, and Liberals now have the support of 49.3 per cent of voters, giving them a narrow lead on the parties supporting the current Social Democrat government, who have received 48.8 per cent votes.

And nobody might have forgotten the name Amineh Kakabaveh. The independent Swedish lawmaker and former Kurdish fighter on whom the Social Democrat government has repeatedly relied for its survival in close parliament votes, said Sweden bowing to Turkey’s demands regarding the Kurds issue was a “black day for Swedish foreign policy”.

“The Kurds have been sacrificed in this cynical political approach. Why should the Kurds be sacrificed for Nato membership? Why is Sweden bending over for Erdogan?” she said. An incensed Kakabaveh even threatened the government with launching a no-confidence motion if the government fails to justify its position with Turkey.

After making Sweden bow before all the demands, Turkey beseeched Sweden again to hand over the Kurdish people who Ankara alleges to have been involved in militancy. Sweden is home to nearly one lakh people of Kurd roots. The government touching on a cordial note with Turkey has got this community standing over the edge. Finland and Sweden both have endorsed Turkey’s view of considering PKK and other Kurdish forces as terrorists giving the darkest of thoughts to run through the displaced Kurds community who held dear the safe land of Sweden.

Turkey is playing its old tricks and now supports a newly formed pro-Islamic Party Nyanset (Nuance Party) in Sweden that targets Turkish and Muslim communities in a bid to reach the election threshold of 4% and enter parliament in the 2022 elections.

With a raging Kurdish MP, an incensed Kurdish community, a worried populace, and the mismanagements in the economy, the snapshot for the upcoming election is clear. A sagacious Erdogan had designed all this knowing the upcoming events. Moving along, Finland made it clear that it will only be with Stockholm that Helsinki could join the US-led military bloc. Unfortunately, the upcoming events will arguably upset the two Nordic countries.

Turkey got it sensible to lift back the veto after discerning the political turmoil in Sweden and Ankara’s move of lifting sanctions will not account for backstabbing Russia as Putin already made it clear that Nordic countries joining NATO is no more a matter of concern for Russia.