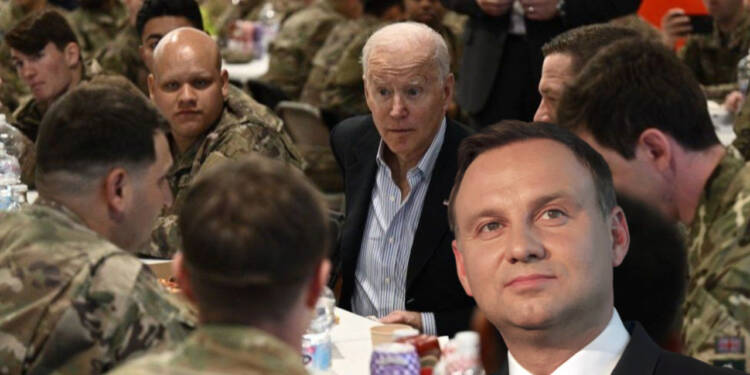 Russian Foreign Minister Sergei Lavrov recently declared that the war in Ukraine isn’t just a conflict between Moscow and Kyiv. It is a “proxy war” in which the world’s most powerful military alliance, the US-led North Atlantic Treaty Organization, is using Ukraine as a battering ram against the Russian state.

And now another ground for such proxy war is being prepared by the US. The United States is planning to establish a permanent military base in Poland as announced by US President Joe Biden recently.

“In a moment when Putin has shattered peace in Europe and attacked the very tenets of rule-based order, the United States and our allies are stepping up,” said Biden after arriving in Madrid for the NATO summit.

Ukraine as US’ pawn

Nevertheless, when the conflict between Russia and Ukraine started, the US jumped into the war in the name of defending Ukraine’s territorial integrity and sovereignty. But the hidden intentions of the US were pretty obvious, i.e, to defeat Russia. The US tried all the possible ways to arm Ukraine with all the advanced weapons it had, but it failed. The US has provided reckless financial and military aid to Ukraine just to defeat Russia in the war.

The Biden administration has been distributing these weapons in an indiscriminate manner. Since the Russian incursion more than four months ago, the US has already delivered around 5,500 Javelin anti-tank missiles to Ukraine. Also, weapons, ammunition, and a variety of light and heavy military equipment, such as anti-tank and anti-air defense systems, howitzers, and drones, are being sent by individual NATO member countries.

Hence, Ukraine became the ground for the proxy war of the US against Russia.

Another blunder in the creation

And as Biden sets up everything to use Poland as the US’s pawn in future conflicts with Russia, Poland is Ukraine in making. Recently, Biden announced the construction of a permanent US military base.

In response to Russian threats, the US will establish a new permanent army headquarters in Poland and deploy more land, air, and sea assets throughout all of Europe, according to US President Joe Biden, who also vowed to “defend every inch” of NATO’s territory.

Additionally, the US had earlier promised to make the Polish army “one of the most capable in Europe.” In order to strengthen its defence capabilities in reaction to Russia’s actions against Ukraine, Poland has been looking to buy military hardware from the US, such as attack helicopters and air defence systems.

The recent increase in the number of US personnel stationed in Poland, according to the Polish defence minister Mariusz Baszcak, is “the biggest deterrence in terms of Russian aggression” and “testament to the high degree of Polish-American interoperability.”

Nevertheless, Poland is another scapegoat in making just like what happened with Ukraine. Indeed, Poland right now is overlooking the fact that how US’s hidden agendas have already left Ukraine in tatters. And if Poland doesn’t awake from its slumber, it is undoubtedly a future Ukraine in making.