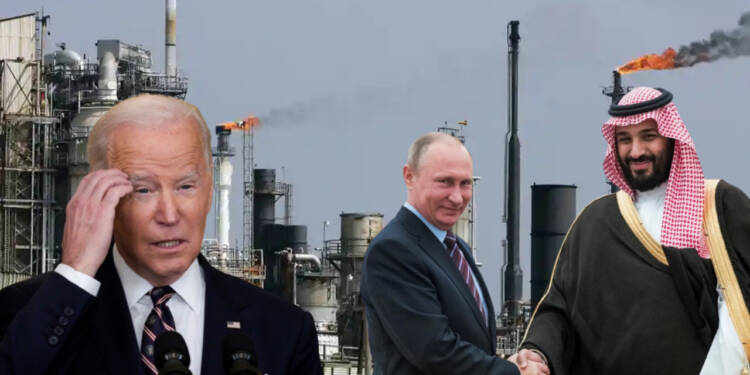 The Baltic nation of Estonia used to ship oil to the world’s largest crude exporter in the past few months. Evidently, the oil originated from Russia.

Estonia imported 8 million barrels of fuel oil in the first five months of 2022, of which most came from Russia and got reexported again, according to Iman Nasseri, the managing director for the Middle East at consulting firm FGE.

Saudi attuned towards Estonia with three cargoes imported from Tallinn in the past months of May and June. Albeit spiralling with its business, Russia is keeping a busy eye on finding new faces in the global market to trade, more owing to the embargo that the west piled on Moscow barring any deal with European countries falling within the ambit of EU.

But all the plot got into an entangled mess after the Baltic countries fell for the big talks purported by the US-led military bloc NATO. Currently, the Baltic nations seek an enhanced security deployment from NATO to secure their borders from a delusory Russian attack.

NATO has even agreed to deploy 300,000 troops near the Baltic and eastern Europe to fancy a chance to match the Russian might that will only confound the already war-embroiled Baltic region.

Carried away by NATO talks, Estonia has also sought a ban on Russian oil and has ably supported the EU decision by cutting away from Russian imports of oil and gas. With new players to counter Saudi’s dominance in the oil market and a yet-to-be-solved frayed relationship with the US, the kingdom felt the blues after there happened a sudden dearth in import of fuel oil as Estonia alternated its stance to go with NATO.

But the Kingdom as always found a wiggle room to get past the hurdles that Estonia left for them. If it was Estonia before, now Egypt chaperoned Saudi out of the crisis with large supplies of fuel oil to Riyadh.

The kingdom will take 3.2 million barrels of the power-station fuel from the northeast African country, the highest in at least six years, according to Vortexa Ltd. data compiled by Bloomberg. For its part, Egypt’s own imports of the product from Russia are set to soar to 1.8 million barrels, the most since at least 2016.

Saudi Arabia’s appetite for fuel oil went high after seeing how ramped up is the energy demands due to the hot climate that sifts through the middle east and Europe. “Saudi Arabia has indeed been ramping up imports of Russian fuel oils as there are no sanctions preventing this from happening,” Peter La Cour, an oil analyst at Energy Aspects, told Bloomberg. “Russian fuel oil is the cheapest barrel available to fuel Saudi summer power generation demand and makes economic sense.”

Saudi Arabia in turn has the big power to refine this fuel oil and then sell it again. Saudi can easily tax the willpower to do it since they house the multi-trillion-dollar giant Aramco, the Saudi Arabian Oil Company.

The kingdom even gave active signs to western and European countries about raising the oil production in case the Russian crisis makes the pathway more difficult to trade oil. Meanwhile, Europe is craving for an alternative while US Presidident Joe Biden prepares to visit Saudi to pacify an irascible MBS to increase its oil production.

Saudi could take leverage of this crisis and appallingly, Russia will revel in joy seeing a trade deal in times of raining sanctions, and that too with the same countries that sanctioned Moscow. Moreover, the current episode shows that sanctions are a great arbitrage opportunity and Saudi has the riches to simply dominate the game.