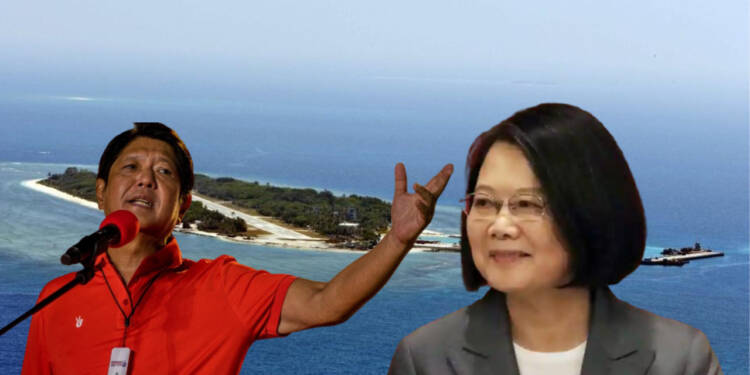 “Ferdinand Marcos Jr. sworn in as the President of the Philippines.” Where will this take the already terrible status quo between China and the Republic of China- Taiwan? However, the announcement of a pro-Chinese Philippine president might have sent shockwaves in Taiwan. Well, this must have led to an escalation of the tensions between Taiwan and the Philippines due to some recent events.

Taiwan and the Philippines are already entangled in a dispute over a polyonymous island. Taiwan knows the island by the name of ‘Taiping’ while the Philippines by ‘Ligaw island’ and internally as ‘Itu Aba’. The Philippines Department of Foreign Affairs says that the island belonged to them which has now been controlled by Taiwan. The island is located deep in the south China Sea.

Though the Philippines and Taiwan do not have formal diplomatic relations, there are strong cultural and economic ties between the two nations, and Taiwan is home to over 160,000 Filipinos, most of whom are migrant laborers. But as soon as a pro-China leader began his tenure in the Philippines he started locking horns with the island nation.

In a tweet posted late on Tuesday, the Philippine Department of Foreign Affairs expressed “serious opposition” to Taiwan’s planned illegal live-fire drills near the island, also known as Itu Aba.

“This illegal activity raises tensions and complicates the situation in the South China Sea,” the Philippines Department of Foreign Affairs said.

Taiwan’s foreign ministry declared in a statement that the island was a part of the Republic of China’s territory and that it was granted all pertinent rights under international law. Taiwan also controls the Pratas Islands at the very northern end of the South China Sea.

“Our country has the right to conduct routine exercises on Taiping Island and related maritime areas. In order to ensure the safety of maritime traffic and fishing boats operating in adjacent maritime areas, we notify the relevant regional countries in advance before each live-fire drill,” it said.

The largest island in the Spratly Islands, which are also claimed by China, the Philippines, Vietnam, Malaysia, and Brunei, in full or in part, is Itu Aba.

Amidst the ongoing tussle between Taiwan and China, the move of a pro-Chinese leader to take the office comes as a blow to the Taiwanese. Beijing is in a bid to reunite Taiwan island with mainland China forcefully. Xi Jinping’s administration has threatened to reunify China and Taiwan a number of times, even by use of force, if necessary. The Chinese People’s Liberation Army (PLA) too is in the habit of flying its fighter aircraft into Taiwan’s defense identification zone.

In the forthcoming times, if the Philippines and mainland China come in each other’s support and form an alliance, it could create a tough situation for the Republic of China- Taiwan. This diplomatic stand-off between the Philippines and Taiwan will help China realize its expansionist dreams.