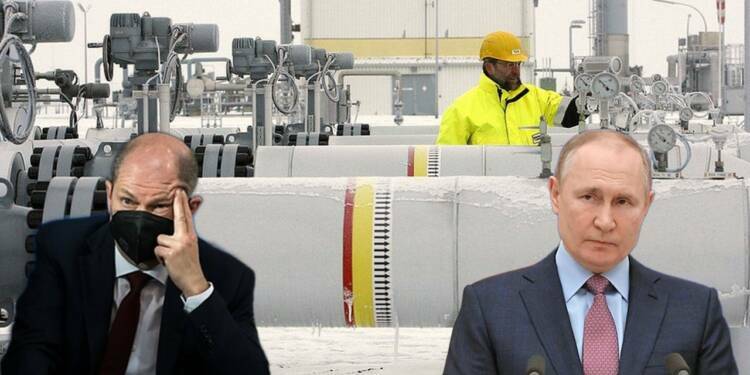 Germany is going through a gas crunch. Berlin’s primary gas supplier is Russia, which provides one-third of the gas required by the biggest economy in Europe. Even though Germany has imposed several sanctions on Russia after the Russia-Ukraine war, it continues to pay $220 million to Moscow, every day, in energy payments. So, Germany is financing the war and simultaneously making efforts to stop it. Funny, right?

Well, the dependence of Germany on Russian gas puts it into a hysterical situation. And it’s just going to grow worse, to the point that Olaf Scholz, Germany’s Chancellor, may have to step down. Scholz’s government is planning to implement a clause, the consequences of which, will force him to resign. The heat of Russia’s gas will be felt at Berlin’s Federal Chancellery.

Why will Scholz step down and what is the draconian clause? Is it related to Russian gas? Let’s find out.

In February, when the war between Russia and Ukraine broke out, Germany put Nord Stream 2 project on hold in opposition to Russia’s invasion of Ukraine. It continued its anti-Russia approach by imposing several sanctions on Russia to target Moscow both financially and economically.  Scholz didn’t stop there but further sent weapons to Ukraine on the behest of his masters in America.

The anti-Russia course of action by Berlin surprised geopolitical analysts. Germany and Russia had enjoyed a vibrant relationship in recent years. You see, Germany’s former chancellor Angela Merkel tried to put sense in the ruling class of Berlin. She said in one of her interviews, “Russia and Europe are neighbours and they won’t be able to ignore each other. We have to find a way to co-exist despite all our differences.”

Make no mistake, the gas situation in Germany is so severe that Scholz could perish along with it. By the end of March, Germany declared the first phase of gas emergency —the “Early Warning Phase”, which is an indication of a reduction in the supply situation of gas.

Furthermore, in mid-June Gazprom, the Russian energy giant reduced gas supplies by 60 per cent citing technical issues. The move was vigorously opposed by Germany. Berlin blamed Moscow for intentionally cutting gas supplies and had termed it an ‘economic attack’.

Gazprom’s decision to cut gas supplies forced Germany to enter the second phase — the “Alarm Phase”, which emerges when there is a danger of long-term supply shortage. It also includes a clause which enables the government to pass on the high gas prices to industries and households.

Initially, Germany’s economy minister had said that the clause has not yet been invoked but “it’ll happen if the gas prices keep soaring because of the supply squeeze and the power companies continue to incur huge losses.“

Both the terms mentioned above have happened and the clause might get triggered in the upcoming days. Europe’s gas prices have surged highest in two weeks after Russia reduced the gas from Nord Stream 1. Also, as the gas supplies from the pipeline would be halted when it will undergo annual summer maintenance in mid-July, the prices will soar even higher. Experts have also warned that the German gas prices can triple if the same situation continues. There are also fears that Russia might not resume gas supplies to Europe after the maintenance. And, if that happens Germany will fall short of filling its gas storage facility to 90 per cent by November, aggravating its crisis further.

The expense and pressure on energy corporations to find gas substitutes would increase as gas prices continue to rise. Uniper SE, one of the biggest energy companies in Europe, is already in talks with the government for a bailout. The company said that the huge pressure is making it buy fuel at spot prices after Russia reduced the gas flow. Its shares fell 18% on Thursday to the lowest level in over five years.

Under long-term contracts, Uniper is reliant on Russia for more than half of its natural gas requirements. One of Europe’s leading importers of natural gas, the corporation provides gas to several industrial firms and municipal utilities.

In a statement issued by the energy giant on Wednesday, the company emphasized the need to implement the cause which allows the high gas prices to consumers. “The ability of utilities to pass along higher energy prices to consumers would be a necessary and essential prerequisite for being able to issue a new earnings outlook with sufficient certainty. Since Uniper cannot yet pass on these additional costs, this results in significant financial burdens,” the company said in the statement.

Another energy giant E.ON SE is appealing to the government to create a framework for when the gas imports will be reduced, hinting at the clause to be enacted.

As all the energy companies are incurring losses, it’ll be impossible for the government to ignore their voices. The government would soon have to enact the clause which passes the burden of soaring prices to households and industries.

Industries are already warning of shutting down operations leading to huge unemployment. Besides, a further increase in gas prices would become an albatross around the neck of an already overburdened German populace.

With winters approaching and high gas prices, people would be left with no other choice but to resort to protests, making it hard for the government to continue. The easiest option way out would be the stepping down of Olaf Scholz to calm down the agitated people. Annalena Baerbock who is the German Minister of Foreign Affairs and the second-most influential figure after Scholz might take the reins and steer Germany out of the crisis.