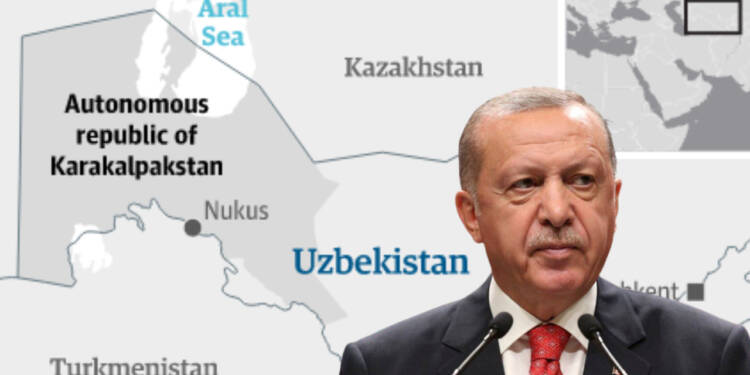 There is an ongoing trend in Central Asia. Earlier, Kazakhstan held a referendum for bringing new reforms to its constitution and administrative machinery. Following the suit, Uzbekistan President Mirziyoyev had suggested new constitutional reforms.

Stressing over a “New Uzbekistan” vision, Mirziyoyev provided a comprehensive list of revisions and stated his wish for them to be implemented in 2022, in time for the constitution’s 30th anniversary. The planned reform would strip the region of Karakalpakstan of its leverage.

The recent amendments would have downgraded the present rights of Karakalpakstan as the area had the right to secede by holding a referendum. But many unusual things happened in Karakalpakstan after the news of the amendment came.

Protests and Emergency in Karakalpakstan

Uzbekistan President Shavkat Mirziyoyev has declared a month-long state of emergency in Karakalpakstan’s autonomous republic as a few rare protests broke out in the region over a planned constitutional reform.

Mass demonstrations broke out in the region’s capital over these planned constitutional changes. Moreover, unnamed protesters gathered citizens on the square near the complex of administrative buildings in Nukus.

They made an attempt to seize these state institutions and raised slogans to destabilize the sociopolitical situation in Uzbekistan.

Understand the magnitude of the protests, they were so widespread that Mirziyove had no other option but to give in to the protestors’ demands.

Uzbekistan has reneged on its plans to eliminate the right of the country’s Karakalpakstan Autonomous Republic to secede, according to Mirziyove’s office.

This is a victory for the protestors and they have no one to thank but Erdogan.

Read More: Germany lashes out at EU for ‘plotting’ to get 1000 German soldiers killed at Russia’s hands

You see, Turkey is constantly expanding its footprint in Central Asia, signing trade and defence agreements, and increasing arms sales. Just a few days ago, President Recep Tayyip Erdogan conducted high-profile meetings with his counterparts in Kazakhstan and Uzbekistan.

For those who don’t know, Turkey wants to evolve the presently active Turkic Council into the Organization of Turkic States (OTS). The motive behind this idea is to form one umbrella for creating a genuine integrated intergovernmental organization.

Karakalpakstan is also a Turkish-speaking region. Yes, Karalpaks are Turkic-speaking people in Central Asia. Their region used to be an autonomous area within Kazakhstan until 1930.

Making Karakalpakstan an independent nation would benefit Turkish desire as the nation would have more control over the region and this will solidify Turkish position in Central Asia.

If Karakalpakstan’s leverage of separating away from Uzbekistan had been taken away, the area would have reduced to a normal autonomous region. But, Turkey does not want this to happen at any cost.

So, these protests happened for reinstating the referendum clause. But, will Turkey’s intention get fulfilled? We don’t think so.

Karakalpakstan was also part of USSR. Furthermore, history has it written that Central asian nations have tremendous connectivity and positive relations with Russia. Russia would never allow the existence of a new nation in Central Asia.

Well, after the protests Uzbekistan’s President promised that the referendum clause would remain untouched in the constitutional reforms of Uzbekistan. But, Central Asian nations would rarely do any move to invite Russian discernment into their region. Mirziyove eyes a third term in Presidential office and for this, he needs Russia.

So, Karakalpakstan’s independence will remain in a predicament and Wannabe Khalifa Erdogan is bound to fail.