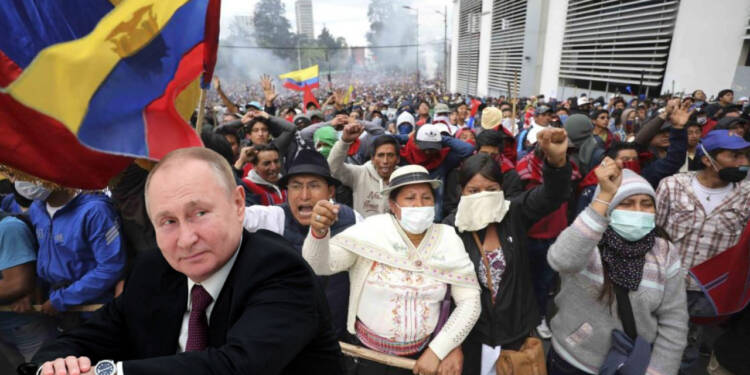 Ecuador’s decision to act against Russia at the UN convention is not really working out for its ruling pro-US government. The dynamics of politics in Ecuador are taking a hard hit for President Guillermo Lasso despite the country’s proximity to the United States.

Ecuador was until recently experiencing widespread protests due to the rising fuel prices and the influx of foreign countries, mainly China trying to expand in the mining sector of the country. Indigenous people rose in revolt against the ruling government’s negligence to protect national interests from foreign aggressors such as China. However, protests did end the previous week after the government struck a deal with the demonstrators that improved the situation for Lasso but apparently, not for long enough.

A Mini Heart Attack For Biden

Biden has made a lot of blunders in his career but encouraging the sanction of Russian energy was by far his worst blunder. After limiting local production of crude oil to promote his green energy initiative, Biden has pushed the United States on the back foot. Biden tried to mingle with the United States’ old nemesis Venezuela by lifting sanctions to ensure oil supply to Europe, but that attempt too did not work out.

Ecuador has been assisting Biden by ensuring optimum oil supply amid the crisis. However, recent events projected a possible halting of Ecuador’s ability to supply more oil to help Biden.

Chinese influx in the Ecuadorian economy, Lasso’s proximity to the US, and rising inflation resulted in widespread revolts in the country by indigenous populations.

The extent of revolts barred the logistics and transport of Ecuador’s capacity of pumping around 520,000 barrels per day. Soon, owing to the intensity of protests, oil production was reported to have been severely limited creating a supply problem for the United States. On Friday, the company said protests had cost it more than $500 million.

The covid pandemic, inflationary pressures owing to the war in Ukraine, and the government’s foreign policies have pushed the Ecuadorian economy into a deep slump. Lasso’s government’s decision to vote against Russia at the UN has impacted the nation’s economy.

The loss of trade with Russia involving bananas alone has led to the loss of lakhs of jobs and almost a billion dollars in revenue for Ecuador. An Ecuadorian exporter said. “With Russia, we had a trade of more than $1 billion a year. There are products such as bananas that are not easy to place in other markets because of phytosanitary measures.’

Read More: US was surviving on Ecuadorian oil. Russia has shut it down as well

Amid all this crisis, multiple ministers have been resigning indicating the eventual demise of Lasso’s pro-US government and the emergence of a Russian-backed government. Ecuadorian Health Minister Ximena Garzon resigned on Monday from the government of President Guillermo Lasso, following earlier news that Economy Minister Simon Cueva would also leave the administration.

Other ministers will also leave the government, Ecuador’s secretary of public administration, Ivan Correa said, without specifying which ones. The Ecuadorians are rejecting the US and Chinese interventions in their economies and their resolution is consolidated by recent happenings in Ecuadorian politics.