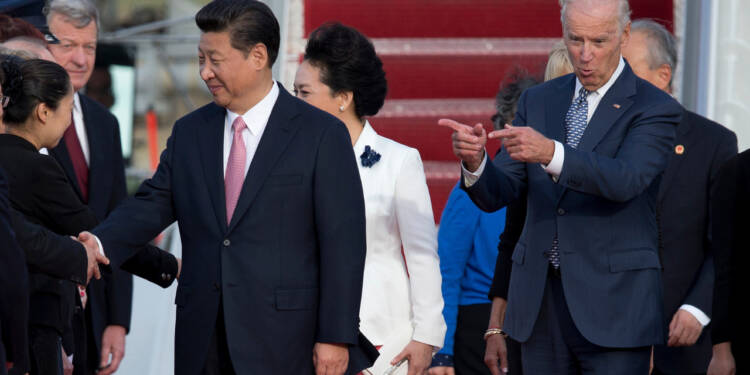 The Russia- Ukraine War prompted by the West has formed dark clouds over the global economy. Almost all of Europe is facing the heat of inflation due to soaring gas prices, but for their leader i.e. the United States, concerns are more draconian.

US economy is all set to go into recession for the 33rd time and now experts have raised an alarm that this recession could be the longest in history. The US has been racking its brain every day to cushion itself before the inevitable fall of the economy begins. Unfortunately, nothing seems to be working out.

History knows how US and China have stayed at odds with each other in the last few decades. Similarly, European nations have been following suit and going out all guns blazing against China in recent times. There are constant calls within the EU to stop businesses and partnerships with China.

But, our sleepy Joe has snubbed the whole west at once with this step, because for the US, nothing matters more than money.

US inks deal with China

All that matters for the world is Oil and Gas, no one knows this better than the USA. Now, rather than keeping themselves at odds with China, the US has inked a deal with China for gas for the next 20 years. The deal was announced by China itself.

According to a statement from China Gas Holdings, Rio Grande LNG, a subsidiary of NextDecade Corp., and China Gas Hongda Energy Trading Co. have inked a 20-year LNG sale and purchase deal.

According to this agreement, NextDecade would be supplying 1mn metric tons/year of LNG to China Gas on a free-on-board basis. The purchase price is indexed to the benchmark price of Henry Hub. The first batch of LNG is expected to be delivered in 2027.

The Rio Grande project’s first two trains, which are expected to commence operation as early as 2026, will provide the LNG. In the second half of this year, more inked deals are expected as NextDecade is going to make a final investment decision on at least two trains of the five-train, 27 mn mt/yr project.

What’s more surprising is that with a Chinese customer, this is NextDecade’s third LNG supply agreement. NextDecade had signed deals with Guangdong Energy in March and ENN in April too.

Like every picture tells a story, this does the same. The NextDecade’s deals with China clearly indicate that US and China have been closing in with each other. Whereas, Europe is moving in a completely different direction.

Read More: Europe had one supply line for oil; Iran chokes it

Europe marches around the USA

Almost every nation on the European Continent marches around the flag of the USA. Whatever the US states and say is blindly followed by these nations. But, the US knows on which side bread is buttered.

This seems to be a sneaky game of the US to make a fool out of the world. On the one hand, it demonstrates that the US is utterly opposed to the expansionist CCP regime. However, on a more sour note, has long-standing evergrowing economic ties with China that are never discussed publicly in the media.

But, Europe is going the exact opposite on the issue of China. Just like Russia, the continent wants to keep no more relations with China.

The recent examples are enough to indicate what exactly is Europe doing with its relations with China. Recently, NATO has mentioned China as one of its enemies and Germany forced its automakers to move out of China by ending the subsidiaries. Furthermore, more and more EU nations continue to express their concerns over the Xinjiang police files that completely exposed CCP.

The relations are becoming day by day bitter and it’s all because of the US’ camouflage of cutting relations with China. Sleepy Joe is making fun of the world by inking Gas and oil deals with the world. Whereas, its own allies in Europe are heading to face the harshest crises.

When it comes to economy and money, the US can even make deals with vultures. Clearly, the European nations are not the smartest tool in the shed. The US continues to expand its footsteps with China while making a fool of the world by showing off as China-hawk, while the EU is doing the complete opposite.