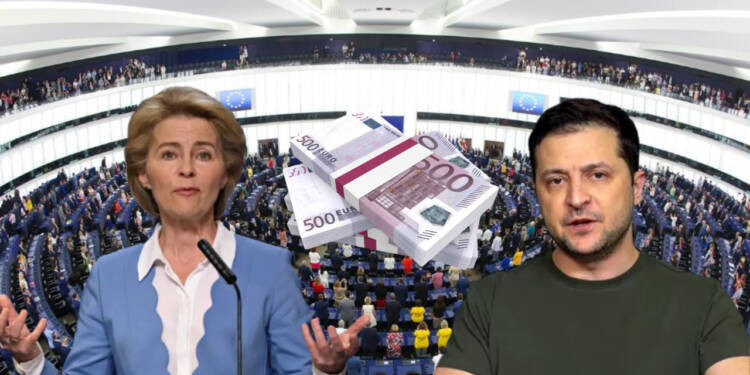 Ever since Russia invaded Ukraine on 28 February 2022, the latter has been fighting tooth and nail to demand accession to the EU. Ukrainian President Volodymyr Zelensky is demanding EU membership right away just to find a fish in troubled waters. Therefore after the onset of the conflict between Russia and Ukraine, the war-torn country is having a finger in the pie to become a part of the bloc.

Ukraine’s cooperation with the European Union comes with the approval of all the members of the Union. All the other 27 members of the union have rendered their approval for the inclusion of Ukraine in the bloc but some countries are likely to show discontent. Ukraine’s candidate status has become a cause of concern for major powers like Germany and France. Since the onset of the war Germany has been supporting Ukraine in the war against Russia by even providing financial and military aid to the war-torn country. But, now it seems that the fortune isn’t smiling upon Ukraine as all this aid and support now seems to fizzle out.

One of the first nations to adopt sanctions against Russia, including limitations on gas supplies, was Germany. The recently constructed Nord Stream 2 pipeline project, which was intended to transport gas from Russia, was also put on hold.

Ukraine was also granted candidate status for membership in the European Union (EU) with Germany’s explicit approval.  But it appears that Germany is now contemplating its decision to back Ukraine’s EU membership.

Read More: Germany vows to block Ukraine’s entry into EU at any cost

EU membership has become a real flash in the pan for Ukraine as now major powers like Germany and France are stepping back on their stance. Despite the outward support of Kyiv’s membership, Olaf Scholz has raised few qualms if Ukraine is given accession to the bloc. He fears if Ukraine is given the membership it can risk the power balance from the major power engines of the EU i.e. Germany and France. They believe that the power balance will tilt towards Ukraine and other Central and Eastern European countries.

Why are the major powers in the EU worried?

Let us decode this power equation for you. Currently, under the bloc’s present voting system, the number of countries voting and their population is taken into account. According to which, Germany and France have the major voting power. Therefore, once Ukraine becomes a part of the EU, Kyiv would have nine per cent of the total EU’s powers.

Additionally, the combination of these forces with Poland, a close ally of Ukraine will make it more potent than Germany. Major powers fear that the group of Poland, Ukraine and other central and Eastern European countries will fill their shoes.

Dr Nicolai von Ondarza, of the German Institute for International and Security Affairs said, “This would shift the balance of power within the EU further away from Germany and France more towards Central and Eastern Europe, where the countries, together with the Nordics, for the first time would become a more sizeable bloc in terms of voting power.”

However, not just major powers like Germany and France are raising concerns over Ukraine’s accession to the EU but small countries like Portugal and the Czech Republic are also questioning the same, given the state of their economy.

If Ukraine joins the bloc its economy would be the weakest in the bloc which will, in turn, force smaller countries like Portugal and the Czech Republic to pay more into the EU budget than they would get back in funds as a result.

Ukraine should learn from Poland

Ukraine was in a bid to exact its pound of flesh from the EU, but it seems like it is barking up the wrong tree. Ukrainian Foreign Minister Dmitry Kuleba said in an interview that Ukraine will have to learn from Poland how to use EU money “in such a way that they give you even more.” This statement came soon after Ukraine was granted the candidate status.

Poland being the largest recipient of EU subsidies has given hope to Ukraine to receive similar aid from the bloc. “By the way, Poland was not flooded with money, Poland learned to take European money and use it in such a way that they give you even more. And this is why we in Ukraine need to learn at the local level, because that’s where the money should go,” Kuleba added.

Giving Ukraine EU candidate status is a significant “symbolic statement,” according to Belgian Prime Minister Alexander De Croo, to help Kyiv in the midst of its ongoing war with Russia. However, he added that the country must first achieve European criteria and that actual EU membership is still “many years” away.

According to Maria Zakharova, a spokesperson for the Russian Foreign Ministry, the European Council’s decision to grant Moldova and Ukraine candidate status for membership in the EU is evidence that the group wants to “contain” Russia. Well, containing Russia is not on the EU’s table for sure.

Well, now it’s time for Ukraine to stop chasing EU membership status and instead batten down the hatches. The hope of exacting its pound of flesh from the EU can prove to be a fool’s errand for Ukraine as membership is still a far-flung dream for the European country.