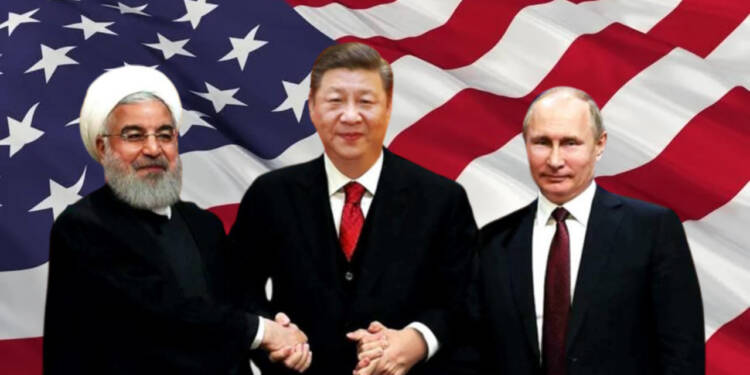 In the face of escalating regional tensions with the US, three countries have teamed up in a bid to show strength to the US.

Russia, Iran and China have ever since been subjected to Western sanctions over various issues, including Russia’s invasion of Ukraine threatening the latter’s territorial integrity, human rights abuses witnessed in China and Iran’s nuclear program. So, now the three countries have teamed up to woe betide the West.

Ever since, the US has been slapping unilateral sanctions on Iran, Venezuela, Russia, and China under a variety of dubious pretexts which led these countries to forge a new front to oppose the US and its allies. This might have sent a wake-up call to the West.

Venezuela, a Latin American country is pushing for strengthening its relations with its Eastern allies as tensions with the West are escalating. Venezuela is now all set to host joint military manoeuvres along with Iran, China and Russia. The four allies have embarked on a path of boosting relations in different fields in defiance of the illegal sanctions that they have been facing from the West for so long. Russian vessels, together with the Chinese and Iranian navies, performed “joint tactical manoeuvring and practised artillery fire at a naval target as well as search-and-rescue missions at sea,” the Russian Defence Ministry said on January 21, adding that the sides also “practised inspection and liberation of a ship that was supposedly captured by pirates.”

Read More: Biden is hooking up Iran with China because Russia is the rude dude

Since taking office in June 2021, Iran’s President Ebrahim Raisi has favoured a policy that strengthens its ties with Moscow and Beijing. “Improving bilateral relations between Tehran and Moscow will enhance security for the region and the international arena,” Raisi once said, according to the government news agency IRNA.

In a recent development, the alliance of the three countries has teamed up to show off its strength on US borders meant to signal how these militaries can reach the US. Iran, Russia and China are running a series of war drills in Latin America.

Russia, China, and Iran will send their armed forces to the Western Hemisphere alongside ten other nations for war games that will “preposition forward-deployed military assets in Latin America and the Caribbean.”

Even Venezuela, which is under an anti-US regime, is taking interest in conducting these war drills in Latin America. Under the leadership of anti-US president Nicolás Maduro is scheduled to conduct the International Army games in mid-August.

Read More: Iran-Russia Arms deal is basically the beginning of the end of China-Iran bromance

So, now it’s time for these countries to show off their strength to their long-time arch-enemy. This strategic partnership between Iran, Venezuela, China and Russia will give a befitting reply to the US, who declares itself as God’s own representative on earth, people who have no responsibilities- only interests. The US is still not getting over with the unipolar world which saw its end long back in the international community.

The team of VRIC is now ready to decode their strength to the West by joining hands and sending a naval armada to the US’ borders.