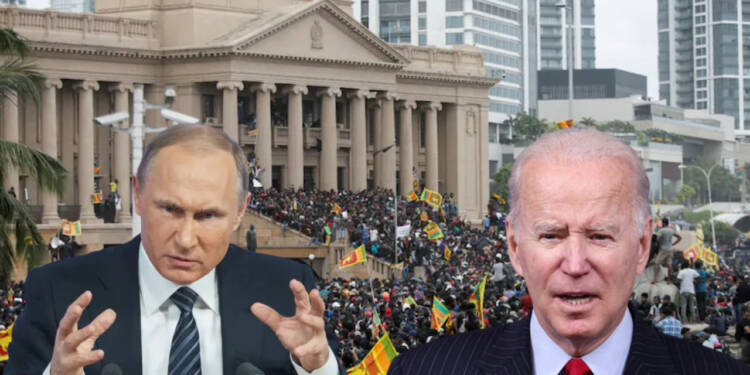 The 22 million-population island nation of Sri Lanka in South Asia is struggling with high inflation, food, fuel, and medical shortages and people’s daily lives are extremely challenging. The Sri Lankan government had already filed for bankruptcy becoming the first country in this century to default on its foreign debt. The nation’s foreign exchange reserves have almost all been consumed by this economic crisis.

Watch this because this is history in the making in Sri Lanka!

But the US is blaming others rather than offering a workable strategy to help the Sri Lankan economy recover from the crisis. US Secretary of State Antony Blinken said Sunday that Russia’s restriction on Ukrainian grain exports may have contributed to Sri Lanka’s turmoil and voiced fear it could spur other crises.

However, inflation is at an all-time high of 17.5 per cent, and prices of staple products have skyrocketed. For example, a kilogramme of rice now costs 500 Sri Lankan rupees ($2.10), whereas it used to cost only 80 rupees ($0.34).

The following causes have been attributed to this crippling economy by many economists and policymakers:

1. Due to the covid epidemic, it is impossible to ignore the link between the decline in the country’s foreign exchange reserves and the earnings from the tourist sector, one of the major contributors to Sri Lanka’s GDP, which fell from over US$4 billion in 2018 to less than US $150 million in 2021.

2. The Chinese debt trap policy- Since the island nation’s financial downturn started in 2010, Sri Lanka’s GDP-to-Debt ratio has been steadily rising. However, China seized the opportunity to ratchet up Sri Lanka’s debt load. China’s support for Sri Lanka’s economy primarily served as a strategy to build political and security clout against India and forward its expansionist objectives along the Indian Ocean Rim.

3. Western countries’ commercial creditors and multilateral financial institutions – Numerous studies have shown time and time again that there is no connection between the current debt issue in Sri Lanka and Chinese-funded infrastructure investment. Only 10% of Sri Lanka’s total outstanding foreign debt is owed in bilateral debt to China. Sri Lanka’s foreign debt is owed to multilateral financial organisations and commercial creditors from Western nations. They sold the loan to ‘vulture funds,’ who actually took advantage of Sri Lanka’s every penny.

Read more: An economically fractured Sri Lanka is making a comeback, thanks to Russia

Therefore, it is evident that Sri Lanka’s economy is not solely in trouble as a result of Covid or China’s debt trap policies. However, certain Western nations, such as the US, are more eager to use the Sri Lankan issue as a geopolitical pawn than they are to actually help the nation.

They look at the unstable Sri Lanka with fascination rather than worry.

Moreover, the US has been pushing Sri Lanka for fulfilling the political demand i.e. to dilute the executive power of the president. This political demand has been seen as a key for Sri Lanka to avail an economic relief package from western governments and institutions such as IMF.

Despite all these evil moves of the US-led Western world, the US is now blaming Russia for this Sri Lankan crisis. The US Secretary of State Antony Blinken said recently that the Russia’s restriction on Ukraine’s food grains is responsible for food shortages in Sri Lanka. But these claims are bogus for the following two main reasons:

2. Recently, as per the recent statement of Sri Lanka’s PM, Russia even offered Wheat to Sri Lanka. And also, we have covered in our articles that how despite the continuous persuasion by Russia; Ukraine isn’t ready to allow the shipments of wheat from its ports.

This out rightly negates the claims of Blinken that Russia is responsible for these shortages of food grains.

South Korea declares China “the biggest threat to its economy”