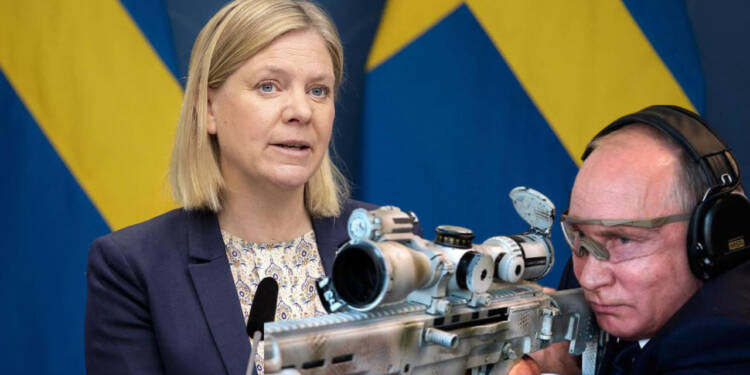 Sweden has finally made the ‘Yes’ nod to nuclear weapons from NATO. The Nordic country has accepted “the essential role of nuclear weapons” in NATO’s approach to defence, in a letter requesting admission to the alliance, sparking controversy in the whole country.

“Sweden accepts NATO’s approach to security and defence, including the essential role of nuclear weapons, “adding that it “intends to participate fully in NATO’s military structure and collective defence planning processes, and is willing to commit forces and capabilities for the full range of NATO missions.” Sweden’s foreign minister Anne Linde said.

Sweden at the start was hesitant to side up with NATO and only got roped into the deal at Finland’s behest. Throughout the arduous proceedings of inclusion into NATO, Sweden was confused and always showed hesitancy to commit in full to the politics of the West-led military force. But eventually, it succumbed to the force from neighbouring Finland and after all, Stockholm never wanted to put a jam on Helsinki’s entry into NATO.

The Russian president’s interesting statement saying he never bothered about the Nordic countries’ entry into NATO should have been taken as a sly warning of sorts, but Sweden rode in optimism with its close ally Finland preparing to make an entry into the West-led military bloc negating any Russian wrath.

Now it has gone to a level that is beyond redemption. Sweden has agreed with NATO on “the essential role of nuclear weapons” to be used to better the Nordic’s defensive capability. The irony is, in 2019, Sweden launched the Stockholm Initiative for Nuclear Disarmament, through which 16 non-nuclear nations sought, among other goals, to “diminish the role of nuclear weapons in security policies and doctrines”.

So, the current shift from Sweden has confused many analysts who once appreciated the noble deed of the Nordic country back in 2019. “In other words, Sweden is now prepared to take part in the use of nuclear weapons,” tweeted Beatrice Fihn, Executive Director of the International Campaign for the Abolition of nuclear weapons, which won the Nobel Peace Prize in 2017.

The Nordic countries at present look so much carried away by the assurances of NATO such that they are keeping a blind eye on the threat that could come all its way from Moscow.

Dmitry Medvedev, deputy chairman of Russia’s Security Council explicitly raised the nuclear threat by saying that there could be no more talk of a “nuclear free” Baltic – where Russia has its Kaliningrad exclave sandwiched between Poland and Lithuania. “Nuclear weapons have always been kept in Kaliningrad … the international community, the countries in the region, are perfectly aware of this.”

Adding more worries comes the dilemma among the public and opposition who are rethinking the prospects of Sweden joining the West-led military bloc. Sweden pivoting further to the West raises concern among people since they have seen how messed up the situation is for West-assisted Ukraine. With Russia repeatedly raising nuclear threats, and with just 4000km to separate the two countries, the Swedish public has all good reason to raise doubts and concerns over the nuclear weapon deal that Sweden has abided to. With an impending September election in Sweden, the pressure is mounting on the government to take the people of Sweden into confidence, and with this single move to go nuclear, the people of Sweden might have already made the verdict.