Kishida is literally begging before Vladimir Putin for Russian gas, but it’s too late now 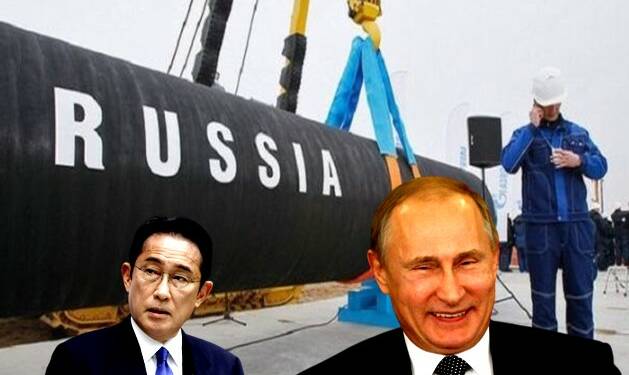 Russia has made Japan go ill at ease. Putin is now bracing up to strike back at those countries who imposed sanctions on Moscow under the garb of the invasion of Ukraine.

To please his Western masters, Fumio Kishida, bombarded Russia with tons of sanctions, even at the expense of the Japanese economy. And now, fear of Putin’s retaliation has made Kishida a cat on a hot tin roof.

Putin finally hits back at Japan

Japan slapped Russia with sanctions owing to its invasion of Ukraine but now Putin has set himself in motion to strike back. Russian President Vladimir Putin has signed an order that will set up an all-new operating company to tighten Moscow’s grip on the Sakhalin 2 energy project.  Now, this is enough to make Japan go haywire. The move has compelled Kishida to get down on his knees before Vladimir Putin, for Russian gas. But, perhaps it’s too late now.

Japan intends to maintain its interests in the Sakhalin 2 oil and liquified natural gas project in the Russian Far East. In a meeting, Japanese PM Fumio Kishida and Koichi Hagiuda, the minister of economy, trade and industry, affirmed a plan to maintain Japan’s interests in Moscow’s Sakhalin 2 energy project.

According to government sources, the Japanese government will coordinate with the two Japanese stakeholders at the end. Under the plan, Mitsui & Co. and Mitsubishi Corp. would keep 12.5 per cent and 10 per cent stakes, respectively but is Russia open to Japan’s plan? Seemingly, no.

Maintaining stakes in the Russian project has become a bone of contention between the two countries now. You see, currently, Sakhalin Oil and Gas Development Co., a Japanese consortium made up of the Ministry of Economy, Trade, and Industry, trading houses Itochu Corp. and Marubeni Corp, among others, owns a 30% share in the Sakhalin 1 project in addition to Sakhalin 2.

Read More: Japan makes it clear that it will not compromise with its “ASSETS” in Russia

The regulation stated that after the new business is constituted, foreign investors must apply within one month to keep their current shares in it. Gazprom owns a roughly 50 per cent stake in Sakhalin 2, while British oil giant Shell PLC has approximately 27.5 per cent, followed by Mitsui and Mitsubishi.

Ray of hope for foreign shareholders

Under the decree, the newly created firm that takes over all the rights and obligations of the Sakhalin Energy Investment Co. will force out Shell and the two Japanese trading companies Mitsui and Mitsubishi. This move of kicking out Shell and Japanese traders is a ray of hope for other foreign shareholders from countries like India and China. Without a doubt, other shareholders may soon ask the Russian government for a stake in the new firm. In fact, there are reports that Shell was in talks with an Indian consortium to sell its stake.

Read More: Putin drops a $15 billion bombshell on Japan by kicking it out of Sakhalin

Make no mistake, the void that will be created by Japanese and Western traders will give nations India an upper hand to make use of the opportunity. Japan has backed the wrong horse. Kishida may be crying for Putin’s mercy right now, but it’s too late.