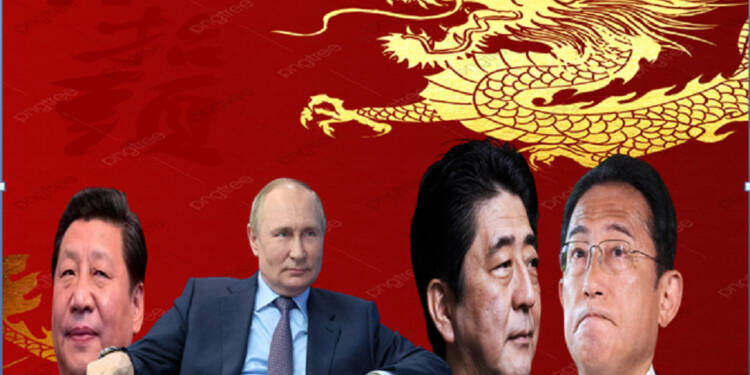 Japan is undergoing a radical change. A change that could undermine Japan from geopolitics forever. And some vultures in the pretext of countries are circling the archipelago in the Pacific Ocean and Sea of Japan.

One would think, Japan was doing all fine recently, all of sudden what happened out of the blue?

Since the end of World War II, Japan was prohibited from engaging in hostilities abroad or using lethal force except in cases of self-defence. It participated in refuelling and humanitarian operations, often in conjunction with the United States and also during many UN peacekeeping operations.

Until Shinzo Abe took office, Japan’s foreign policies were virtually controlled by the USA, which coerced Japan to adopt a pacifistic approach under the constitution of the San Francisco Treaty signed after the Second World War.

The former prime minister, Shinzo Abe, had yet a new vision to pull out Japan from this pacifism.
He visualised Japan as a proactive state having a strong operational military so that Japan could establish a solid foothold in geopolitics.

Japan’s Article 9 which prohibited Japan to take a proactive approach was devitalized by Shinzo Abe of what many analysts refer to as salami slicing of the Constitutional law.
He changed “pacifism” to “proactive pacifism” by enacting a decree of “collective defence.”   Importantly, he is credited with the idea of “QUAD” or “Indo-Pacific strategy” to counter China’s expansionist ambitions. Also, he had been a firm supporter of Taiwan’s independence and security.

But when he stepped down, Japan began warming up to the West and China. Japan has since reverted to its pacifism.
Therefore, Tokyo’s reputation as an independent voice has been destroyed by its “cordial” attitude toward China and its lusty attitude to adhere to US policy.

A recent report by Nikkei Asia unveils Tokyo’s change in attitude. In the last four months, Chinese and Russian military activities in the surroundings of Japan surged by 2.5 times. Analysts say that there is growing concern that the increased activity might be connected to forthcoming military preparations.

Japan and Russia which rarely saw a confrontational outlook towards each other in the last decade have increasingly become hostile in the last four months. Japan and Russia, especially under Abe’s presidency have shared cordial relations despite having bone of contention between two over the Kuril Islands. Japan was even included in the Russian Arctic which shows how the relations between the nations had been advancing under Abe.

But Japan’s anti-Russia stance amid the Russia-Ukraine conflict soured the relations between the two. For this reason, Russia has been taking an aggressive stance towards Japan. For instance, Russia halted the visa-free travel facility to the former Japanese residents of Kuril islands, thereby clarifying the fact that Russia is irked With Japan’s anti-Russia stance. In addition, Russia is moving forward to strip Japan of its share in the Sakhalin Projects which will be a huge blow for Tokyo and will deprive it of LNG imports from the country.

Read More: Shinzo Abe: The man who turned the sleeping giant of Japan into a ferocious Samurai

However, the escalation of hostilities between Japan and Russia has given neighbouring China more confidence.
Alternately, one could assert that Beijing is attempting to take advantage of the situation by striking while the iron is hot. The Senkaku islands, which Japan claims as its own territory, have been invaded 15 times by China in the past six months, according to Singapore Post. Additionally, China began drilling in the contentious East China Sea region between China and Japan for natural resources, primarily gas.

Other than this, Chinese President Xi Jinping signed a decree for the Chinese military to take actions other than the war. The actions could have been taken in the view of Japan and Taiwan. And if China invades Senkaku in the near future, it will directly attack Japanese culture. We’ve already witnessed the spats between South Korea and China over food and history.

On the other hand, Japan has taken actions that have aided China’s aggressiveness. It has disregarded “QUAD” and is seeking assistance from NATO. As a result of Prime Minister Kishida’s visit to the NATO summit, government pronouncements began to use terminology like “Asia-pacific” rather than “Indo-pacific. Japan which was earlier looking to host nuclear weapons backtracked on the idea which had perturbed China.

Japan under Shinzo Abe was seen to have adopted a muscular approach in shielding Taiwan from Chinese aggression. However, even after continuous reports of increased China’s aggression in Taiwan, Japan has abandoned the island.

The submissive approach adopted by Japan will be paid by Tokyo through the nose. Japan’s re-emergence led by Shinzo Abe in the global arena has been halted by Fumio Kishida. The very concept of “Japan” and “Japanese” is under siege as it faces a looming threat from China.