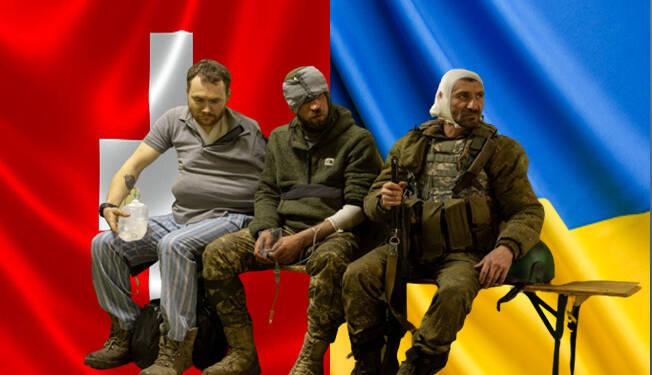 Switzerland has prioritised peace, security, and the rule of law in its foreign policy for many years. According to the Swiss people, prosperity and sustainable growth depend on “neutrality.” The country has stayed out of the Ukraine war for this reason.

By emphasising neutrality Switzerland has rejected the proposals made by the prime minister of Ukraine to use frozen assets of extremely affluent Russians to contribute to the $750 billion reconstruction project in his nation. However, it appears that NATO is determined to draw Switzerland into the conflict.

Recently, the NATO department of the Euro-Atlantic Disaster Response Coordination Centre asked Switzerland cantons to treat the wounded Ukrainian soldiers in the name of humanity. The Conference of Cantonal Health Directors (GDK), Switzerland’s national group of healthcare professionals, then declared that it is “fundamentally open” to the concept of allowing injured Ukrainians to receive medical care in Swiss institutions.

However, Switzerland has since reversed course, and in all honesty, this is a very worrisome indicator for the Ukrainian forces.

According to the country’s Tages Anzeiger newspaper, the Swiss federal government rejected a request to provide medical care for injured Ukrainians on the grounds that doing so would go against the country’s neutral position.

The military bloc sought aid from Swiss medics in caring for not just Ukrainian soldiers but for civilians in need of hospital treatment as well, but Swiss authorities are adamant about helping Ukrainians as it violates the county’s ‘neutral’ status.

The request was reportedly turned down by the Foreign Affairs Department, which said any such admission would be impossible for “legal and practical reasons,”

Bern, a neutral state, might treat soldiers from a third country, but it must make sure they “can no longer participate in the acts of war,” according to Swiss media. Otherwise, such a country would lose its neutrality.

According to the Swiss daily Blick, Bern has additionally threatened to imprison any Ukrainian soldiers it has aided. The report went on to say that another option is to contact Moscow and ask for approval for the rescued soldiers to return to Ukraine.

Therefore, the soldiers of Ukraine appear to have no hope and are up against the wall.

No hope for Ukrainians

Ever since the start of the war, Switzerland has flaunted its neutrality from time to time. The nation backed some of the western sanctions against Russia for its military operation in Ukraine. However, it consistently stood in the way of other western countries providing Kyiv weapons and ammunition created in Switzerland.

Switzerland prevented the transport of ammunition for German Marder infantry fighting vehicles to Ukraine in April. It also rejected Denmark’s request to re-export armoured vehicles produced in Switzerland to Kyiv. Furthermore, it even denied helping Zelensky in rebuilding Ukraine.

Therefore, Switzerland has never supported Ukraine in the conflict, and it won’t support Ukrainian soldiers either because they will eventually return to the front lines. Bern emphasises that according to the Geneva Conventions, a neutral state may cure soldiers who are fighting in a third-party war, but after that, it must make sure they “can no longer take part in the acts of war.” If they don’t, they risk being imprisoned or killed.

The Ukrainian military’s most ardent adversary is now the Russian army. Russian estimations claim that it is executing close to 150 Ukrainian troops per day. So, only God knows what will actually happen to these Ukrainian individuals once they are in Russian custody.

Switzerland is pretty clear about its plan, i.e. to stay neutral even in the worst case. And this is what Bern believes is righteous. But, this righteousness could prove to be disastrous for Ukrainian Soldiers.