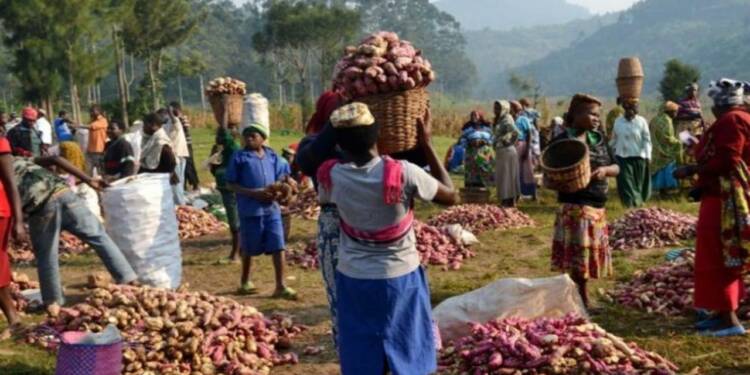 The Russia-Ukraine war has been harsh on the continent of Africa. Many African countries are largely dependent on grain imports from mega producers like Russia and Ukraine to ensure their food security. However, the war has largely choked the grain supplies of the African continent and has led to the development of an emergency-like condition.

Millions of tons of grain are sitting in Ukrainian ports, but are not shipped owing to Ukraine’s mining of the sea, surrounding the area. An increasing threat of migration of African citizens northwards in search of a better livelihood amid the food crisis has even itched some European countries like  Spain and Italy.

The African continent could have become a subject of violence, malnutrition, and unemployment due to the crisis. However, the continent has reportedly found a blessing in disguise in “Sweet Potato”. African food systems are currently being protected by initiatives to diversify essential items like bread and chapati in Malawi, Kenya, Rwanda, and Uganda by substituting the use of up to 60% of wheat flour.

Read More: Hunger in Africa was a blessing, not for the world but for the United Nations

You see, the Russia-Ukraine war has driven up the crop’s prices by 60 per cent on the continent, according to the African Development Bank, forcing many bakers on the continent to either close shop or continue operating at losses.

The introduction of orange-fleshed sweet potatoes, especially the purée, could, however, dramatically change the fortunes of the continent’s bakers.

Furthermore, little quantities of sweet potato can reportedly fulfill the daily Vitamin A needs of a young child.  A majority of its content remains intact after baking and its final products require relatively less sugar and fat than most of its counterparts making it a much healthier option.

There is also the problem of adverse impacts of climate change, such as flooding and drought in the region. Food security declines by five to 20 per cent with each flood or drought while there is a roughly 1.4 per cent reduction in food calories per year from key food security crops, according to the World Bank. But, all types of sweet potatoes are well positioned to help adapt to climate change, thus adding further advantages for African nations.

Private sector entities in Kenya have reportedly teamed up with scientists from the International Potato Center (CIP) and are currently developing technology to produce shelf-stable purée using microwave handling and antimicrobial packaging, allowing it to be stored for more than 12 months at room temperature, thus removing the need for cold storage.

OFSP puree has been effectively marketed in Kenya, Malawi, Rwanda, Burkina Faso, and South Africa. It has also been successfully piloted in Ethiopia, Uganda, Ghana, Nigeria, Tanzania, Gambia, South Africa, and Mozambique. It does look like all of the African continent has adopted a sweet tooth to counter the increasing food crisis.

29 Me Time Quotes To Share With Your Loved Ones