‘Remove sanctions and then I’ll talk,’ Putin’s ultimatum to Europe 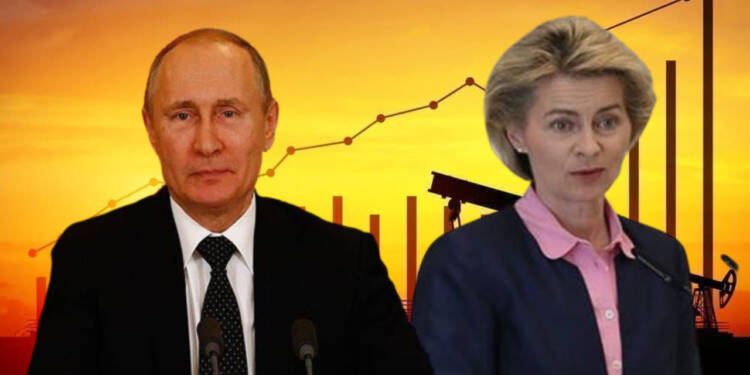 Moscow’s hold on the commodities trade of Europe has brought the west on its knees.  European nations including Finland, Lithuania, and Slovakia imported more than 70% of their total oil imports from Russia back in 2020.

Moscow’s possible decision to halt exports to Europe can easily choke the continent’s industrial capacity and could do much worse in the winters. Talking about gas imports in 2020, Germany topped the list with almost 43% of its total imports coming from Russia.

Read More: All Energy companies in Europe to go bankrupt

Russian President Vladimir Putin hinted towards Europe’s resumption of gas through a crucial pipeline, and also issued a warning regarding halting the supplies in the event that the dispute over sanctioned components is not resolved.

However, Putin warned that if a pipeline component that was affected by sanctions isn’t brought back to Russia, the link may only operate at 20 percent of its potential since another component that is currently in Russia needs to be sent for maintenance.

“If another comes, two will operate. If not, just one, so 30 million cubic meters will be pumped per day,” Putin told reporters after a summit in Iran late Tuesday. He wants the part back in Russia, along with all its paperwork, he said.

The turbine has been received from Canada after maintenance and supply through the Nord Stream- 1 has restarted today and is operating at a 40% capacity.

The supply is now only operating at 40% of its potential, and the ongoing reduction in supply will probably make it harder for nations to restock before the upcoming winter when gas consumption is significantly higher.

European nations have been exploring other gas suppliers to restock. However, it can be costly and time-consuming to create facilities to import gas from alternative suppliers, making it doubtful that Russian gas can be totally substituted before the cold season.

Read More: Russia is prolonging the Ukraine war, and for good reasons

Moscow, in the past ten days, has successfully impacted the minds of western leaders. Putin created havoc in Europe singularly on the pretext of regular maintenance of a turbine. The thought of their populations freezing in the absence of gas amid the upcoming winter has itched the European leaders to newfound levels.

Germany, the biggest economy in Europe, imported 43% of its total gas from Russia in 2020. A sudden disruption in the flow of gas sent an ache to the hearts of the German leaders. The fear was so intense that plans of gas rationing were being drawn up and conflicts between industry and households on the subject of gas sharing started to spring up.

European leaders would surely remember the repercussions they would endure if they attempted to strengthen their aggression against Moscow. Moscow holds the key to powering Europe’s industrial sector and could choke Europe’s economy if the latter chooses to go against it.

In Europe, investing in oil and gas companies is now considered “green investments”