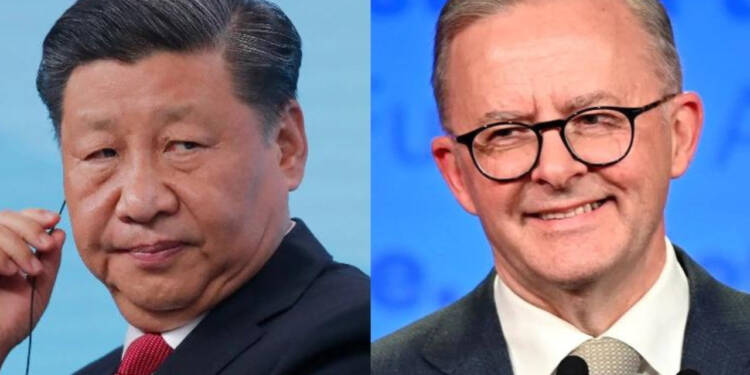 Last year, the AUKUS deal was announced under Australian Prime Minister Scott Morrison in a secret agreement with Washington and London to address the growing presence of China in the Indian Ocean Region (IOR) and the East and South China Seas. Under this deal, Australia was supposed to acquire at least eight nuclear submarines from the US and the UK.

But, ever since the Australian PM Scott Morrisson left office, the Labor party took charge of Australia after a long haul. This was enough to embolden China.

Yet, there were questions about the position of Anthony Albanese and whether he will show his pro-China intentions or not.

And guess what, it just happened, Anthony Albanese and his government have shown a change of heart towards China. This change of heart has put the entire motive of the AUKUS pact into question as Australia now seems to mend its ties with China.

Read More: The pro-China government of Anthony Albanese cancels the AUKUS pact with UK and US

Australia’s new Defense Minister Richard Marles’ has questioned the AUKUS deal with his latest remark about “hi-tech arms” being “more important” than “nuclear submarines”. The Albanese government seems to be in a huff about the ‘Submarine deals’ of AUKUS.

Albanese cites his flip-flopping on AUKUS as US and UK submarines fuelled with tonnes of highly enriched uranium (HEU) would wreck the non-proliferation regime that his party has long supported. And the US and UK submarines use uranium fuel enriched to 93 percent, identical to that in their nuclear weapons. Therefore, the Albanese government has now decided to switch to conventional submarines which are also cost-friendly, so Australia can buy more of them, thereby enhancing coastal defence.

Therefore, Australia is now turning to strike a deal with France which uses only low enriched uranium (LEU) in their submarines. Well, obviously this move of the Albanese government comes along with serious diplomatic challenges since Scott Morrison, who served as Albanese’s predecessor, betrayed France’s confidence by covertly negotiating the AUKUS agreement and cancelling a $90 billion commitment to purchase French conventional submarines. However, Australia has finally resolved that conflict by making an $830 million penalty payment, which made it possible for Albanese and French President Emmanuel Macron to restart their relationship this month.

The Albanese government, despite knowing that conventional submarines cannot stealthily cruise to the South China Sea, is about to sign a deal with France sidelining AUKUS. For the Australian PM, this is not a bug but a feature as it would avoid gratuitously antagonising a nuclear-armed superpower.

Read More: How Scott Morrison tricked the Labour Party and Joe Biden to get the AUKUS deal signed

Now, this comes soon after Australia was seen taking all pro-Russia steps. The Australian PM recently paid a visit to France in order to mend ties with the country. Anthony Albanese met with French President Emmanuel Macron as his new Labor Government was looking forward to mending fences after a major diplomatic spat with France and relations that got strained when Australia scrapped a French submarine deal.

Well, not just this, the Albanese government was also planning to pay a compensation of about €555 million to the French shipbuilder over the submarine deal- valued at $90 billion in 2016 and reckoned to cost much more now – in his efforts to repair the rift. Prime Minister Anthony Albanese said the French firm had agreed to a “fair and an equitable settlement” that is intended to end a decade-old multi-billion-dollar submarine contract.

Clearly, this proves why the Albanese government was so keen on mending ties with the French government. Certainly, Albanese was having an ulterior motive behind this move- to give China away in the Indo-Pacific region.

So, we can say that Albanese’s China love compelled it to cancel the AUKUS deal.

A 35 Collection of Stairs Quotes to elevate you in life