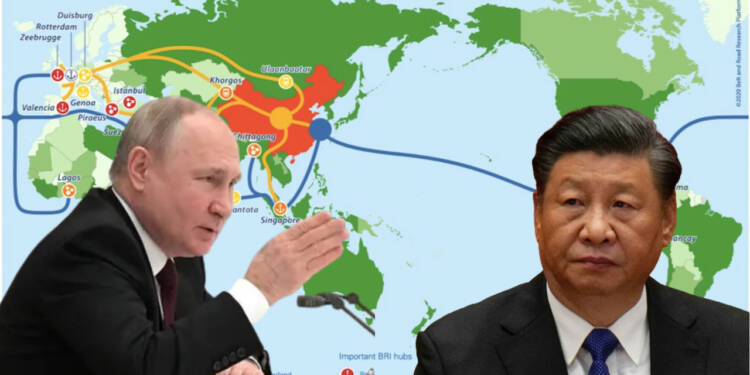 Wars change global orders, and the Ukraine war is no different

Once a waning power, Russia is again sprawling back into the global arena. And that too, at the expense of China’s expansionist warfare

China and Russia are breaking up! Their relationship has always been described as a “marriage of convenience”. And frankly speaking, Russia is no longer required to keep China in good humour to safeguard its economic interests. Despite weak-kneed support from China, Moscow has done a pretty good job at braving the western assault on its economy.

That’s because India, a country of 1.4 billion people and a fuel-guzzling nation, put its weight behind the Kremlin in an unprecedented way, as if there was no tomorrow. This has made Moscow realise that China’s position in Russia’s foreign policy might actually be overpriced.

According to reports, Putin has now made it a point to bulldoze China’s much-touted BRI project in Russia. The Ukraine war has already rendered China’s rail links to Europe via Central Asian nations defunct and redundant. Now, China’s investments in its Russian BRI projects have fallen to “zero.” This year, China has spent not even a single penny on BRI projects in Russia.

Read More: With Russia onboard, India is all set to cut across China’s BRI projects in Central Asia

This is primarily because of two factors. First, China’s coffers have run dry. Second, Russia is no longer a lucrative investment destination, at least for China. Make no mistake, Russia has its sights set on the Northern Sea Route. NSR is a shipping lane officially defined by Russian legislation between the Atlantic and the Pacific Ocean specifically running along the Russian Arctic coast from Murmansk on the Barents Sea, along Siberia, to the Bering Strait and the Far East.

Experts anticipate that this trade route will dominate the global trading regime in two or three decades. So, it makes all sense for China to actually bet on the winning horse, which is Russia in this case, rather than making costly investments in terrorist nations like Pakistan. However, the question to be asked here is, whether Russia wants Chinese projects on its soil or not.

Bone of contention between China and Russia

Russia understands that China is an expansionist power, a power that has already set warning bells ringing in Moscow by declaring itself a “near Arctic” state. China has not even shied away from staking ludicrous claims on the Russian port city of Vladivostok. In Central Asia, China already has launched an unofficial coup. So, Russia has realized that China’s economic leverage against Moscow must be cut to size before it’s too late. So, perhaps it’s the Russian government that is deliberately preventing China’s infrastructural projects in the country.

Read More: Russia seals its authority over the Arctic with a $110 billion mega-port on the Taymyr peninsula

But Russia is not an economically self-sufficient nation. It lacks capital; it lacks manpower; it lacks a huge energy market at home. So, obviously, it needs a strong economy to hold its hands. Russia has finally found one, and this power is not an expansionist one like China.

We’re talking about India. While China’s global status has taken a massive hit post-pandemic, India’s rise on the geopolitical map has remained steady and impressive. Whether in the Arctic or in Russia’s Far East, Russia has worked hard to replace Chinese investments with those from India. As per Economic Times, India’s cumulative investment in oil and gas projects in Russia exceeds $ 15 billion. It is the single largest destination of Indian overseas investment in the oil and gas sector.

Russia has already planned a greater role for India in its Northern Sea Route ambitions. For instance, back in 2019, New Delhi and Moscow signed an MoU to open a full-fledged maritime route between Russia’s eastern port city of Vladivostok and Chennai on India’s eastern seaboard. Through this trading route, India can easily access Russia’s highly-priced energy projects in the Arctics. This will not only guarantee India easy access to cheap sources of energy but will also help New Delhi encircle China strategically.

As we mentioned earlier, wars usually change global orders. And the war in Ukraine has made Russia a geopolitical heavyweight again. Given India’s imminent economic and political rise on the world map, the Russia-India partnership can really pay off. And this will greatly help India take on China by its devilish horns and dwarf its economic and military might for the global good.

Fuel Woes: A massive inter-province immigration wave is about to hit Canada