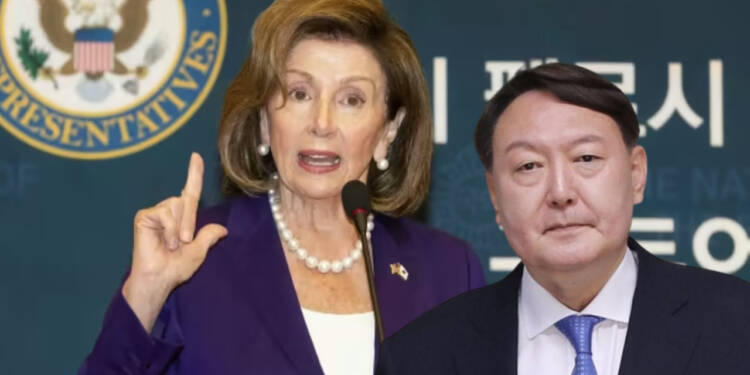 This week, Nancy Pelosi, speaker of the United States House of Representatives and a high-ranked politician met the prime ministers of Singapore and Malaysia. She had a meeting on Wednesday with Tsai Ing-wen, the president of Taiwan. The tour comes to an end in Tokyo, where Pelosi has a meeting with Fumio Kishida, the prime minister of Japan, on Friday.

However, the president of South Korea Yoon Suk-yeol has decided against having a face-to-face meeting with House Speaker Nancy Pelosi while she is in the region, making him the only Asian leader to do so.

According to a South Korean official cited by state-backed Yonhap News Agency, Yoon is on a “summer vacation”. Yoon decided to do away with Pelosi the speaker of the House of the oldest democracy in the world by a formal phone call.

Seoul-based reporter, Raphael Rashid tweeted a picture of the South Korean President going out for drinks with some local actors on Wednesday evening.

Also, no ROK delegation went to greet her last night.https://t.co/RPQLzgpqQG

Also, no government delegation went to receive her when she landed. Only officials from the US embassy in Korea were seen waiting to receive Pelosi and others.

This was a big humiliation for US and Nancy Pelosi. However, South Korea has got good reasons for it.

South Korea distancing it from US?

Seoul is done with the ambiguous policy of Washington over Taipei. US’ ostentatious policy on Taiwan of supporting it militarily if ever faces invasion from China has been a matter of concern for the Korean country. Any offensive action by China will embolden the CCP to go rogue in the whole region.

According to the Taiwanese defence ministry, the supply of vital military equipment to Taiwan is being delayed by the USA. 40 of the M109A6 Paladin self-propelled howitzers promised to Taiwan between 2023 and 2025, have been delayed till 2026 because of the alleged “difficult” supply conditions in the United States. Similar is the case with 66 F-16 fighters and 250 Stinger surface-to-air missiles which have been delayed too.

Given the delay in the arrival of weapons, the Taiwanese ministry has stated that it is looking into other options for buying weaponry. US also rebuffed Taiwan’s entry into Indo-Pacific Economic Framework (IPEF). The trade agreement includes 13 countries that account for 40% of the world economy and which could have helped Taiwan grow by leaps and bounds.

Additionally, the demands for South Korea’s indigenous nuclearization have been increasing.

The Ukraine war has aggravated the concerns because of North Korea’s and China’s growing nuclear capabilities and doubts over US defence commitments.

71% of the South Koreans support indigenous nuclearization even if the country has to exit from the Non-Proliferation Treaty. The NPT requires non-nuclear signatories to refrain from developing nuclear weapons. Don’t be surprised if South Korea leaves NPT and asks for nukes anytime soon. However, US is adamantly opposed to the idea.

Yoon is also not happy over the journey QUAD has gone through. During his election campaign, Yoon pledged to take part in the Quad’s various working groups but has US has consistently attacked the “idea” of QUAD. South Korea is looking to get a formal membership in the QUAD Plus but the US has not allowed for it.

The indifference shown by the US toward South Korea has come to bite it back. The disregard for Seoul’s concerns by Washington was bound to have repercussions. Biden’s disastrous foreign policy is perturbing its allies. So, Yoon Suk-yeol’s snub of US and Pelosi was a long time coming. And it’s just the beginning.

The Alberta conundrum: Ominous signs that Trudeau is ignoring