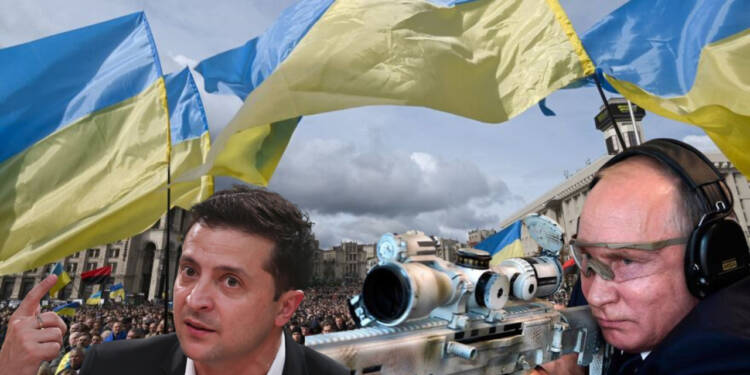 Ukrainian President Zelensky’s ambitions seem to know no limit. The man has been single-handedly responsible for the deaths of thousands of his countrymen. Ukraine has always been a sensitive region since the breakup of the Soviet Union and former Ukrainian administrations have always treaded carefully.

Zelensky, unlike the former Presidents of Ukraine, does not hold merit to rise to the highest post in the state. His accession to power has purely been based on luck supported by his popularity that stemmed out of his career in entertainment.

Ambition without Experience is bad luck

Legally, Ukraine’s accession to NATO would have opened doors for the west-led alliance to place its troops within the Russian border and that could have been a nightmare for Moscow.

Therefore, Moscow had long been warning Ukraine from joining the NATO alliance. Former experienced Ukrainian leaders have for long understood the situation they are a part of and as a result have tried to maintain cordial relationships with the Kremlin.

Read More: Zelensky slaughters his own men in uniform to hide his dirty secrets

However, things go sideways when inexperienced individuals tread into dangerous territories. The same situation had developed in Ukraine when their clown President, perplexed by ambition, pushed his country into a war he could not win.

Ukrainian civilians are finally awakening from the nationalistic dream that gripped them a few months ago. They have started to realize the fault in their leader’s decisions. The civilians have finally understood that the war is purely a consequence of selfish ambitions of their clown President.

Popular Ukrainian blogger and activist Yury Kasyanov recently made a post on his Facebook page, in which he complained: “Let’s stop the mobilization, open the borders, and dissolve all the military recruitment offices… Let the professionals do the fighting – after all, they get paid for it – and let the volunteers join in, because they want to fight. But I am an untrained civilian, unfit for war, I’m going to get myself killed. And I pay my taxes, too!”

With this provocative post, Kasyanov intended to spark a discussion about mandatory conscription in Ukraine. But the results of the debate came as a shock to the blogger: “Judging by the comments on the previous post, nine out of ten Ukrainians have no intention to fight; they oppose nationwide mobilization, as well as the ban on men leaving the country.”

Even before the conflict broke out in February, Ukraine was experiencing a demographic crisis as its population dropped from 52 million in 1991 to a little over 30 million.

All of this offers a crystal-clear explanation for why Kyiv is aggressively seeking out foreign mercenaries. They can be sent to the riskier areas since they are more driven than Ukraine’s own recruits.

Practically speaking, Ukraine’s population demographics are not favorable enough for them to allow mass mobilization of their untrained citizens against the professional Russian Army.

Ukrainian President Zelensky should finally come to terms with the realities developing around him. It is high time he decodes the alternate intentions of his supposed western allies and let go of the unfruitful conflict that has already taken a toll on thousands of lives.