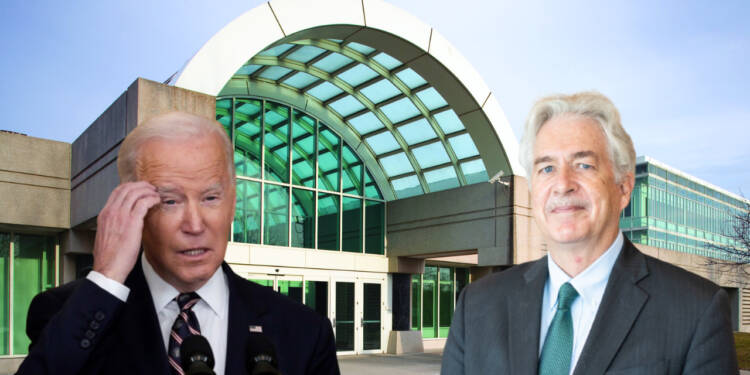 The Kremlin might be sick of refuting false claims made by the Biden administration now.  But, isn’t it hilarious how the leader of a country wages misinformation against another just to fulfil his selfish interests?

Well, when it comes to Russia Biden can go to any lengths.

But Kremlin’s task of refuting has been taken up by USA’s CIA chief. Yes, CIA chief.

US President Joe Biden has long been running a campaign. What campaign? Spreading fake news. Yes, you got that right. You see, Joe Biden holds a very significant position, right? And with a top position comes a lot of responsibilities. And what Biden is doing? Running a fake news factory.

The US President has been deliberately peddling lies and spreading rumours against his arch-enemy, Russia. “President Putin has undergone advanced treatment for cancer,” “Russia is losing the war,” “Russia is preparing to use chemical agents in the ongoing Russo-Ukraine war,” and whatnot.

The US government has gone too far in its speculation spree. And, where did it lead the US? His own chiefs are now busting down his ‘fake news factory’.

The Biden administration has long asserted that Russian President Vladimir Putin is suffering from ill health or he might get assassinated. Putin, 70, has been the subject of media conjecture over the past few months. As per the West’s claims, a specialist in thyroid cancer named Yevgeny Selivanov recently visited Putin in the southern resort city of Sochi, where the president received cutting-edge cancer therapy. It looks like the western media also has a thing for spreading fake news and dancing on Biden’s tunes.

But, what comes from the CIA chief is contradictory to the US’ administration itself. President Putin is “far too well,” according to CIA director William Burns, despite rumours that the Russian leader is ailing.

“There are lots of rumours about President Putin’s health and as far as we can determine he’s completely too healthy,” the CIA director said at a security summit in Colorado.

The US has been trying to bolster confidence in a lifeless Ukraine by spreading such damning pieces of news against Russia. The Biden administration has been busy spreading rumours about Putin ever since Russia invaded Ukraine. From his health to Russia losing the war, all sorts of baseless speculations have been made.

Furthermore, the strange “Havana syndrome” cases were the subject of an interim assessment from the CIA in January, and its ambiguous conclusions suggested that the agency did not place the responsibility for the instances on Russia, China, Iran, or any other foreign power. Burns seemed sceptical in his subsequent remark that US enemies were pursuing American spies, diplomats, and officials stationed abroad.

Also Read: US wants to designate Russia as a state sponsor of terrorism. Here is why Biden won’t

“While we have reached some significant interim findings, we are not done. We will continue the mission to investigate these incidents and provide access to world-class care for those who need it,” Burns said.

Similar to this, he used neutral language in his remarks on May 7 about Russia potentially utilising tactical nuclear weapons in Ukraine to reverse military losses, not even attributing Russian objectives to such acts. He said, “intelligence agency (does) not see practical evidence of Russian planning for the deployment or even potential use of tactical nuclear weapons.”

Moreover, in March the Washington Post reported that the US government believes Russia could soon carry out chemical attacks on Ukrainian soil. US security and diplomatic officials pointed to possible preparations by Russia for deploying chemical munitions and warned that the Kremlin may seek to carry out a “false-flag” attack that could attempt to pin the blame on Ukrainians, or perhaps Western governments. When asked about more details, the officials brazenly declined. Guess what, this attention-grabbing assertion has also turned out to be official “fake news”.

NBC News has now reported that the US administration had no evidence that suggested that Russia was preparing to use chemical agents in the ongoing Russia-Ukraine war.

But, was that the reality? Hell no. Just mere Biden administration’s manoeuvres.

In America’s race of winning the Great power contest, Burns has emerged as a setback.

“My job at CIA is to support and inform policymakers, so they make the best possible choices; it’s not to become policymakers. Our obligation is to deliver (intelligence) in an unvarnished way without any political or policy agenda,” he has said.