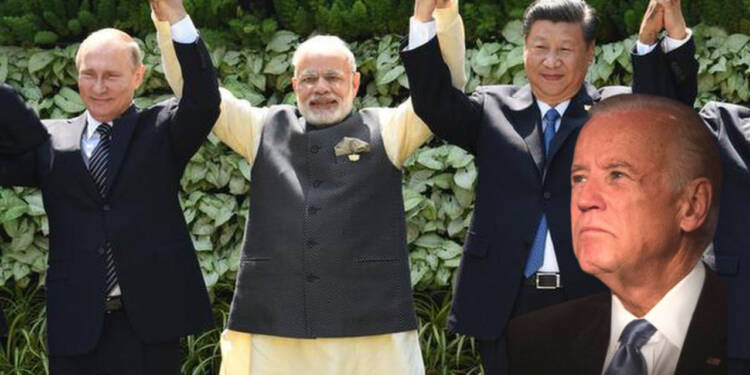 The BRICS alliance is currently the most underrated forum on the global stage. It is an important grouping bringing together the major emerging economies of the world, including, Brazil, Russia, India, China, and South Africa. These states collectively comprise 41% of the world population, 24% of the world GDP and over 16% share in the world trade.

Russia, India and China are major global players and are collectively capable enough to lead the global order. Additionally, the conflict in Ukraine has significantly altered the global dynamics. The hegemony of the United States and its western allies is now on the decline. This gives a golden opportunity for the rise of the Eastern bloc.

The major issue with the BRICS grouping is the prevalent conflicts of China with both India and Russia. However, there is complete potential for these issues to be resolved through dialogue but it seems like Beijing is fostering alternate intentions.

BRICS has been becoming increasingly significant in the global order. Anti-US nations like Iran, Saudi Arabia and Argentina have reportedly already applied to join the multilateral mechanism.

Read More: Why has BRICS become so popular among the developing world after the Russia-Ukraine war?

However, it looks like China preferably chooses SCO over BRICS, where it would get to engage with like-minded partners like Pakistan. Currently, eight countries are full-time members of the SCO, including, India, Kazakhstan, China, Kyrgyzstan, Russia, Pakistan, Tajikistan and Uzbekistan.

Naturally, China is keen on working with countries like India and Russia to oppose the west, but it is also looking for preferred avenues where countries who support Beijing would also hold membership.

The biggest threat to the United States hegemony today is the rise of the BRICS and the Biden administration had probably understood the fact. However, no matter how good the Americans analyze, it makes no difference unless they act strategically to counter threats.

But, it looks like Biden’s administrative playbook to counter the rise of BRICS is more or less a joke.

The US administration is looking for alternatives to replace Russian energy amid the Ukraine war. Factually, the US is almost self-reliant for its energy needs but its European allies are under a grave threat of severe energy insecurity.

As a result, the US has long been trying to influence the Middle Eastern nations to increase their output and help Europe. Biden recently visited the Middle East and tried to pressurize the Saudi leadership to take an anti-Russia stance. He wanted to break up the OPEC+ alliance between Saudi Arabia and Russia so that the US could exert control on the energy supplies in the region.

However, Mohammed bin Salman, the Crown Prince of Saudi Arabia spoke with President Putin within the week of Biden’s visit where they discussed further expansion of trade and economic cooperation and significantly, also underscored “the importance of further coordination within OPEC+.”

Biden’s actions have triggered the rise of an Eastern block against the West. Reports suggest Saudi Arabia’s interest in joining the SCO alliance just a few months after Iran’s admission to the grouping.

The Error in Analysis

Recent developments indicate that Biden intentionally triggered the Middle Eastern powers to look toward the SCO. But one might wonder why Biden himself would do that.

Naturally, Biden was more threatened by the rise of the BRICS alliance than he is by the SCO. However, what the 79-year-old President has failed to realize is that an organization like SCO where a nation like China plays all the shots is already headed towards failure.

He has failed to understand that there is nothing that he could do to hinder the rise of the BRICS alliance. It would be stronger than ever if China comes to terms with India and Russia but even if it does not, an alliance between India and Russia is strong enough to counter any rising threat.

Moreover, with Middle Eastern energy-rich countries looking to join the BRICS alliance, the grouping could become stronger than ever with all partners bringing in necessary resources.