The Turbaned political macho of British Columbia — Jagmeet Singh, has always been the X-factor behind the stability of the Justin Trudeau-led government of Canada.  For years, Trudeau acted cordial towards Jagmeet Singh because of the crucial Khalistani voter base the latter carries along. But now, the bonhomie is feeling a rupture that might put Trudeau in serious trouble with the government falling in the coming days remaining a possibility. 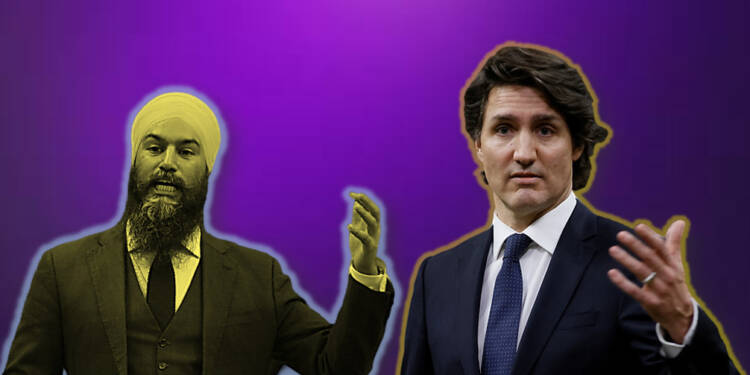 Federal NDP leader Jagmeet Singh has recently announced he’s all set to take back his support given to Justin Trudeau’s Liberal Party if the Canadian PM fails to fulfill Singh’s pet project demand.

According to NDP Leader Jagmeet Singh, if Prime Minister Justin Trudeau fails to implement the socialized dental care program by the end of the year, NDP would have no choice but to cancel their confidentiality agreement, which might lead to another election.

Furthermore, many NDP members have begun to criticize the federal government, claiming that Trudeau has only been concerned with regulating the internet, stopping law-abiding citizens from acquiring weapons, and maximising the barbeque season, causing Singh’s pet project to be abandoned.

In March, Jagmeet Singh had made a deal with Justin Trudeau that could help Canadians get a dental care program. In this deal, the New Democrats vowed to support Trudeau’s Federal government in power until 2025 if certain conditions were met. But, all of a sudden, NDP wants to part ways and bid adieu to Justin Pierre James Trudeau.

Well, Jagmeet Singh and NDP MPs may pass the buck to Trudeau for triggering them to drive up the wall. But there are rumors circulating in the Great White North that Jagmeet may be setting up a facade to persuade Trudeau for a little help because of the recent revelations of escalating Khalistani crimes in British Columbia.

Whatever it be, if the NDP leaves in the midst, then it is doomsday for Liberals.

There should be no doubt that the NDP has assisted Trudeau’s federal government stay afloat. Justin would fall short of the majority should NDP decide to split with the Liberals and the next in the cards will be a sudden election.

And honestly, due to the Canadian government’s recent atrocious conduct over Trucker protests, tackling Inflation, relations with provinces, and even revamping the healthcare system, the Liberals and Justin Trudeau have a slim chance of getting back to power.

Justin Trudeau has the lowest approval rating in history, a national survey by Abacus Data indicates that only 34% of Canadians are satisfied with the performance of the Trudeau government, with a disapproval rate of 51%.

As a typical knee-jerk reaction, Conservatives have started to become popular in Canada.

Return of the RW

This might seem astonishing but Conservatives have started to gain ground amongst common Canadians. In recent times, the federal Conservatives raised more money through public than the Liberals and NDP combined during the second quarter of this year. The Conservatives raised over $4.4 million from about 36,000 donors and that too in the name of Perrie Poilievre.

Perrie Poilievre’s constant rise over the past few months has already rattled Justin Trudeau and the Liberal party.

The former Conservative prime minister Stephen Harper has also endorsed Pierre Poilievre to be the party’s next leader, which has boosted Poliveire’s prospects of winning elections.

Moreover, if an election pops up in Canada, there won’t be any China this time for Trudeau’s help. Accusations are still afloat about the dubious cameo China played in setting the win for Justin Trudeau in the 2019 Snap elections.

But now, Beijing has a handful of issues to solve. China won’t waste any time putting the focus on Canada since it is well evident to anyone that no tactics would help Trudeau get back to the throne of power this time.

In Canada, even though Jagmeet Singh may not support the Conservatives, his next move could be the catalyst for Trudeau’s downfall. It will be interesting to see whether Trudeau gives in to this pressure or has the guts to embrace early elections.