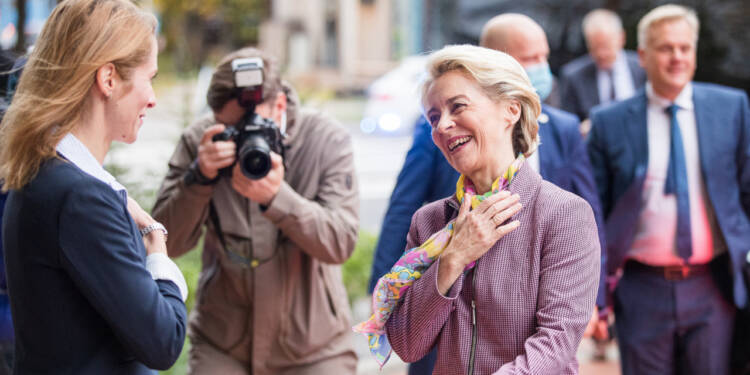 Estonian Prime Minister Kaja Kallas is facing an impending ousting after elections materialize in a few months. Kallas is growing anxious by the day and is cooking up ‘schemes’ to prolong her tenure or atleast solidify her legacy.

However, her attempts are not exactly in the interests of local civilians and businesses. The Prime Minister’s ambitions are on the rise and they have triggered dangerous consequences for the baltic nation.

Kallas has been a western dove ever since the conflict in Ukraine started. She failed to visualize the magnanimity of the consequences of her support to the Zelensky regime. Well, the results of her ambitions are pouring down as tears of high inflation on innocent civilians. Inflation in Estonia has surged 22.7 percent annually,  the fastest inflation surge in the eurozone.

However, even after orchestrating the crisis for her citizens, the Estonian leader does not seem like she is willing to let go of her ambitions.

According to ERR, Finland and Estonia are about to integrate their coastal missile defense systems which would allow the countries to close the Gulf of Finland to Russian warships if necessary. Estonian Minister of Defense Hanno Pevkur has also confirmed the strategy.

In a meeting with the Defense Minister of Finland, Pevkur agreed to integrate the defense systems of the two countries and exchange vital information. “The range of Estonian and Finnish missiles exceeds the width of the Gulf of Finland,” Pevkur said.

Furthermore, he added, “The joint missile defense will allow NATO countries to close The Gulf of Finland. The Baltic Sea will become NATO’s inland sea when Finland and Sweden join the alliance.”

Kallas is inciting the Kremlin despite the turbulent state of affairs in her country. Estonia has teamed up with Finland to control the Gulf of Finland and choke Russia’s St. Petersburg port. It feels like the Estonian leader is pressuring Putin to wage war on Estonia so that she could postpone the elections.

Kallas has surpassed her Euro-gang peers, but not in a good way.

The inflation rate in Estonia significantly exceeds the bloc’s average. Prices increased 8.9% in the year through the end of July in the other 19 nations. Bells of an economic collapse are ringing but ironically what Kallas wants is a war with Moscow.

Recently, reports of  Estonia’s plan to bar Russian citizens with Schengen visas that were issued by the Baltic state from entering the country were also picking up pace.

Estonian Foreign Minister Urmas Reinsalu said after a government session on August 11 that, although the Schengen visas issued by his country will remain valid, they will not be accepted for entry into Estonia.

The Estonian leader has left no stone unturned in her attempt to provoke Russia. She has surely been doing the dirty work for her Western overlords but the only sufferers are the innocent Estonian civilians who are losing money with each passing day.

Moreover, Estonia’s membership in the eurozone means it can’t change interest rates independently to suit its own economic needs, such as raising borrowing costs now to choke off economic activity and so prices.

All indicators are pointing towards Estonia’s impending economic ruin and Kallas is the one to be blamed. She has been trying to completely isolate the nation from everything Russian.

Read More: NATO’s plan to block Russia’s access to the Gulf of Finland has a Kaliningrad-size loophole

The controversy over a monument honouring Estonia’s rescue from Nazi Germany by the Soviet Union last week shook the nation. Many Estonians have demanded the removal of the tank from the border town of Narva ever since Russia invaded Ukraine. Tallinn plans to demolish these monuments. The municipal government of Narva has taken the initiative and made the decision to take the tank out on its own.

Kallas wrongly assumes that her so-called Western friends would come to her rescue in case of need. She should take notice of the proximity of her nation to Moscow before drafting the anti-Kremlin foreign policy.