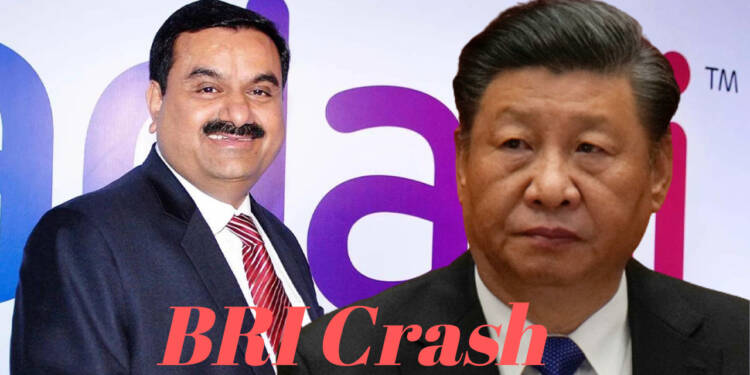 The Chinese Belt and Road Initiative is undoubtedly a massive undertaking. Many states in the Indo-Pacific region are highly involved in the project. However, there is a scary trend that most countries shockingly did not expect.

Nations like Pakistan, Bangladesh, and Sri Lanka have been on the receiving end of heft loans from the Chinese and ironically, the economies of all three nations are on the brink of ruin.

Pakistan has been struggling with maintaining its foreign exchange reserves, Sri Lanka has already defaulted and is not able to provide its citizens with basic necessities and Bangladesh has asked the International Monetary Fund (IMF) to start negotiations for a loan.

The world is now becoming increasingly cautious when dealing with Beijing so as to refrain from becoming a casualty of the Chinese debt trap.

Gautam Adani comes to the rescue

As a result of these Chinese developments, the United States and other Western countries have launched a number of different programmes to counter the BRI. The U.S. and the other members of the G-7 launched a plan to raise about $600 billion for global infrastructure projects in developing countries in the next five years.

However, these efforts are scattered and narrower in spectrum than China’s BRI.  It may be more meaningful to look to China’s neighbor and rival India and explore its capabilities to counter the BRI.

An Indian business giant – Gautam Adani is reportedly gearing up to take over BRI’s supremacy by scouting for support from local and international governments. The Adani Group operates ports, airports, power generation, and transmission, gas distribution, and other businesses. Because of the growth in the value of his companies, Forbes and Bloomberg now rank Adani as the world’s fourth-richest person.

Adani is a big name in infrastructure and reportedly holds influence in the Modi cabinet. Moreover, the group has the relevant experience and technical know how. India has positive relationships with many of the nations in the Middle East, South Asia, and Southeast Asia that Beijing has focused on with the BRI. The Adani group can be supported by the Indian government in proposing alternatives to the Chinese BRI and offering better terms.

The Indian foriegn policy has taken a turn for the good since the incumbent PM Modi came to power. New Delhi holds considerable soft power in many regions of the world. India’s strong position in the QUAD could help Adani source financing from giants like the US and Japan.

Read More: How to stop your country from being raided by radical Islam? Lessons the world can learn from India

The country’s favorable demographic situation like access to low priced and skilled labor could be another factor that could help the Adani group tone down the costs of the projects and become a better prospect than its Chinese alternative.

Adani Ports unit managed to win a tender to take over Israel’s Haifa Port in July with a bid of $1.26 billion. The deal has ramped up the company’s image and has placed it in a superior position when compared to China’s state-owned Shanghai International Port Group.

The extensive experience held by the Adani group would further help them source for additional finances from interested parties locally and abroad. If played well, a collection of big infrastructure houses could overshadow the BRI.