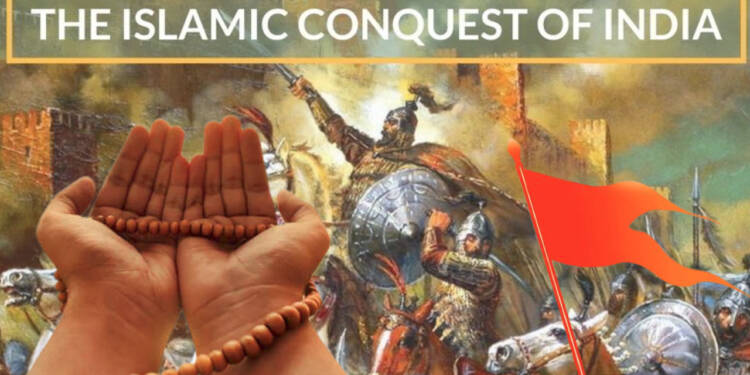 Following the death of Prophet Muhammad, Muslim conquests resulted in the establishment of the caliphates, which covered a sizable portion of the globe. As Arab Muslim forces gradually expanded their empire by capturing significant lands and erecting imperial buildings, Islam’s spread was aided.

This Islamic wave conquered the Middle East, Central Asia, and a major part of South Asia, except for one land, that is the Indian Subcontinent. For more than 1000 years, radical Islamists tried to penetrate the region, although they succeeded to seize territories but failed to hold them for a long haul.

History has written that India has been conquered and looted by invaders. This invasion was not only land-based but also cultural. India was culturally assaulted by radical Islamists, the temples were broken, Universities and Libraries were burned, and importantly, Hindu culture was questioned and modified on purpose.

There was a time when the Persian Gulf was majorly covered by Parsis, but radical Islamization led to the total dispersal of the Parsi community and forced them to migrate. However, secular India is dominantly covered by Hindus. This explains there is something within the spirit of Hindus that has still held them together.

The first invasion and era of the Islamist wave

If we talk of the first Islamist attack on the Indian subcontinent, the first trace comes in the ninth century, when Mohamad Bin Kasim invaded the continent’s Sindh region. He was an Umayyad Caliph who started the Umayyad operations in India by leading the Muslim conquest of Sindh, which is now a part of modern Pakistan.

He ended the Sindhi Brahman dynasty and killed Raja Dahir Singh. Dahir’s head was brought to al-Hajjaj ibn Yusuf in Basra. As a result, the Islamic province of Sindh was established and Kasim became governor of the region.

Then came the Slave dynasty, with Qutub Ud-Din Aibak. Aibalk captured a large part of northern and eastern India. He amalgamated his control over North India through an administrative hold over Delhi. He initiated the most tyrannic Islamization in Delhi and established the Quwwat-ul-Islam mosque and the Qutb Minar. In the midst, many radical Islamic sultanates came, but the longest rule started with the Mughal emperor Babar, the ruler who established Pan-India control for the first time. His 5th generation Aurangzeb controlled a dominated vast majority of India and honestly, he was the worst ruler one could Imagine.

Aurangzeb destroyed Hindu temples and scriptures like never before. He used to slaughter Hindus, and assault children and women. The renowned Gyanvapi mosque is built on the ruins of the Vishwanath temple, a grand 16th Century Hindu shrine destroyed in 1669 on Aurangzeb’s orders.

After Aurangzeb, the Mughals became negligent and Colonial rule started in India. The East India Company was solely responsible for creating division amongst the Hindu community. Emboldened by the varna-vyavastha, the britishers introduced the caste system.

Despite all of this, a majority of the community still remains Hindu. The Indian government was badly affected by the colonial mindset. Famously quoting Jawahar Lal Nehru, who served as India’s first prime minister, Nehru reveals the congress’s attitude toward Hindus.

Nehru said: “By education, I am an Englishman, by views an internationalist, by culture a Muslim and a Hindu only by accident of birth.” Even if that’s not enough for you, Nehru appointed the first education minister a Muslim, Maulana Abul Kalam Azad.

Abul Kalam and his successors altered Indian education and its syllabus into an Anti-Hindu paranoia. This cultural altercation should have destroyed Hindus and their ethnicity. But, surprisingly that is not the case yet.

Hindus are still united and equivocal against Islamization. This trend has become more visible post-2014 when Congress was ousted out of power with a thumping majority.

Read More: As France gets hounded by radical Islamist nations like Pakistan and Turkey, India must come to support it

The Rise of Hindutva

Hindus have always responded in the best way possible whenever an Islamic wave has begun to spread over the country. In history, the Marathas, Mewars, and other dynasties never allowed the Mughals or any other Muslim dynasty to have peaceful sleep.

It was known that Hindus answers very rarely. But, Hindutva came into the limelight during the Bombay blasts of 1993. Pro Hindu party Shiv-Sena and its supporters took the streets against the terror activities and underworld that was dominated by Muslims. The uprising was so-strong that the underworld had to run away from Bombay to Arab countries just to save their face.

Even during the recent Nupur Sharma case, the Supreme Court lambasted the convict over her remark on Prophet Mohammad, but the supporters who are majorly Hindus have no guilt in their hearts to support Nupur Sharma. You would still find the #isupportnupursharma tag on social media.

Hindus at present have no hesitation to show their discontent with radical Islamists, Hindus have stopped to have a soft corner in their hearts, and embraced courage for years.

Lesson for the world

This was only Radical Islam that was responsible for Islamization in the world But, the counter-unity amongst Hindus is the sole reason that protected Hindus for more than 1000 years and sabotaged the raid by Islamists.

Not endorsing the violence, India is also the land of Gandhi. But, counter-unity is really important for the world to acknowledge and adapt because even today, many nations are still becoming a victim of Radical Islam. Most European nations are seeing radical Islamists picking up arms against the government and its people.

In such a scenario, the majority must keep in mind that they do not need to crumble and embrace Islamization; instead, they should get ready for a counterattack and remind the radicals who really control the situation.