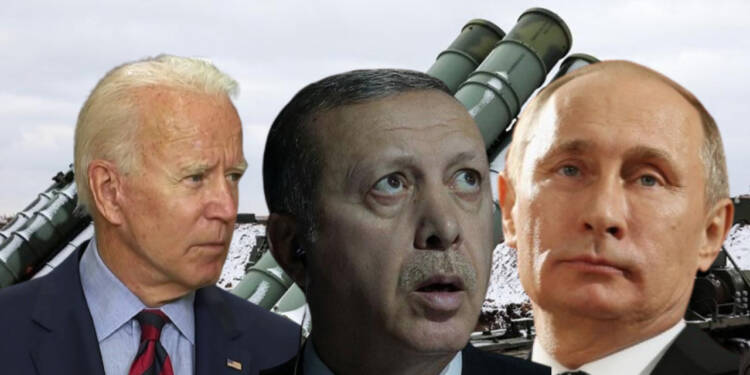 Troubles do not seem to end for the Turkish president, Recep Tayyip Erdogan. He is now wedged between Putin on the one hand and Biden on the other.

A Turkish defence official has categorically denied any new deals on the procurement of S-400 defence missile systems out of fear of triggering more CAATSA sanctions against Turkey. But Ankara is unquestionably ignoring the possibility that doing so may prompt Moscow to take stern action.

Defence ties between Moscow and Ankara

A $2.5 billion deal was signed between Russia and Turkey in 2017 for the delivery of four S-400 batteries. As a result of this agreement, Turkey became the first member of NATO to acquire this Russian air defence missile.

Erdogan additionally stated in 2019 that Ankara plans to manufacture the missile system with Moscow. An option for a different regimental set appears to have been included in the contract. Further, the leader stated that Turkey has no reservations about acquiring a second batch of Russian S-400s in August 2021.

The decision by Ankara to purchase a Russian-made system angered the US and NATO. In retaliation, the US suspended the sale of F-35 fighter jets to Turkey in 2019 due to worries that it would provide military secrets to Russia.

However, this did not halt Moscow and Ankara’s defence trade links. They continued discussing the purchase of S-400 missile defence systems.

In a surprising move lately, when a Russian state news agency said that Russia and Turkey had signed a contract to ship Ankara the second batch of S-400 air defence systems, a Turkish defence official immediately cast doubt on the report.

TASS news agency cited the head of Russia’s military cooperation service, Dmitry Shugayev, as saying: “I want to note that the relevant contract has already been signed. It envisions the localisation of production of certain components of the system.”

But a Turkish defence official said on Tuesday there were “no new agreements”.

“The original contract that was signed with Russia for the purchase of S400s already included two batches. The purchase of a second batch was included in the original plan and the related contract,” the official said.

The technical talks about the delivery of the second batch are underway, and these issues include, but not limited to, the stake of Turkish engineering in the systems, what components will be produced in Turkey, etc. Therefore, we do not have any concrete developments worth reporting. The process is ongoing and there are no new agreements,” he added.

S-400 is a clear necessity for Ankara

However, this clearly indicates that Turkey wants to keep the deal low-key so as not to attract any punitive measures from Washington. On the other hand, Putin is making no bones about publicizing the deal, which has spelt doom for Ankara.

Nevertheless, the S-400 defence missile system is for sure not a luxury for Turkey, it is clearly a necessity for the following main two reasons:

Moreover, considering the present scenario with the changing global scenario amid the Russia-Ukraine war, the indication of further instability in the region marks it important for Turkey to well equip itself in order to defend its borders. Therefore, S-400 makes it a necessity for Turkey and it for sure can’t afford to compromise with it.

However, the US is looking for reasons to make Turkey a further pariah state and to exclude it from NATO for the following reasons:

Read more: US wants to throw Turkey out of NATO but Greece needs to be sacrificed

And now, if Ankara goes ahead and buys the S-400, Washington would have the chance to punish Ankara by excluding it from NATO and imposing harsh sanctions on it in the midst of an already deteriorating economic situation due to surging inflation, in accordance with CAATSA. Additionally, if Ankara abandons its S-400 ambitions, it will face the music in Syria. Both scenarios result in a loss for Turkey. This sums up Erdogan’s predicament precisely: “stuck between the devil and the Dead Sea.”

Collection of 33 drama quotes and captions