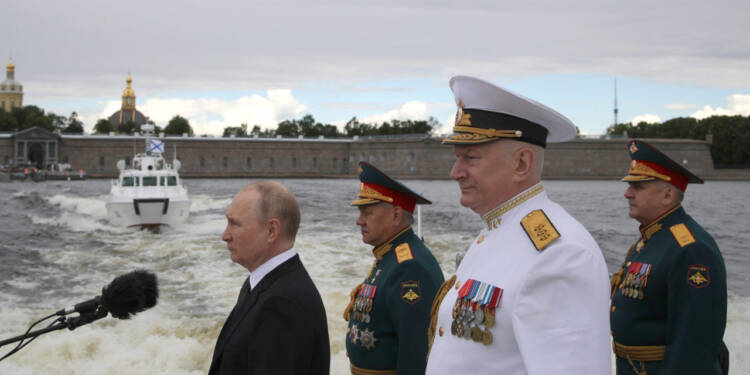 The dissolution of the Soviet Union in 1991 undoubtedly led to the fall of a great superpower. The union broke into 15 independent countries out of which Russia was the only contender that could have hailed as a counter to the USA.

Despite having a sizable nuclear arsenal, the Russians were not viewed as a big threat to the west, even if they managed to retain the Soviet Union’s former seat in the UNSC. The fall of the Soviets, therefore, gave birth to the unipolar world order with the US leading the race.

However, the Ukraine conflict has started to change the dynamics. Moscow has now started taking advantage of its large coastline and its hold on the energy supply to Europe. Putin is on a spree of forming partnerships and launching missions and now has declassified his plans in front of the world.

Russian President Vladimir Putin recently signed an updated version of the Naval Doctrine of the Russian Federation. This high-level strategic blueprint elucidates Moscow’s official approach to the maritime domain. The new edition differed greatly from the previous one signed in 2015.

Moscow declares its intention to increase its naval presence on the high seas and confirms its increased readiness to use military force to further its interests in international waters. It also announces plans to strengthen its naval combat capabilities globally.

But, what exactly are the highlights of the doctrine? How exactly is the Kremlin going to direct its resources in the international waters?

Overall, the doctrine suggests ramping up defenses against the west and focusing on geographical areas that are mentioned in detail in the document.

Reducing efforts in the Atlantic direction, which is now ranked third in priority, the Arctic and Pacific directions, which were previously mentioned in the second and third spots, have been promoted to the first and second spots, and, would now be the point of focus for the Russians.

It looks like Moscow is now beginning to increase engagement in waters around Japan, a staunch US ally.  The document specifically lists the Okhotsk Sea near Japan as an area of existential importance.

Japan’s government has been pursuing reforms to undo the pacifist constitution and develop nuclear weapons. The Kremlin has taken notice of the development and is probably taking steps to hinder the rise of yet another nuclear power in its neighborhood.

Another noteworthy inclusion in the list is the Caspian sea. Russia’s recent rise internationally is majorly due to its hold on the global energy supply of the world. We all know that Moscow has solid ties with the OPEC+ nations and an increased presence in the Caspian sea would allow it to hold influence in Iran, a large oil producer.

Read More:  In the Russia-US Cold war 2.0, UAE has chosen a side

The Russians are interested in expanding cooperation with Iran, Saudi Arabia, and Iraq; and seek to develop diverse ties, including security and maritime cooperation, with all countries of the Indian Ocean basin.

The doctrine also mentions some “Important Areas” like the eastern Mediterranean basin, the Black Sea and the Sea of Azov, the Baltic Sea, the Turkish, Danish, and Kuril straits, and even international shipping routes off the coast of Asia and Africa.

Presence in the black sea allows the Kremlin to check Turkey and Greece and to control the major route that joins Asia with Europe. On the other hand, a hold on the Mediterranean basin is necessary for Russia to lay authority over the Dardanelles strait.

One of the things to notice is Russia’s decreased emphasis on the Chinese. The 2015 version of the Naval Doctrine stated that the “development of friendly ties with China is a key component of national maritime policy in the Pacific direction,” whereas China is completely absent from the current document.

Russian strategy could be decoded if we briefly study the geographies of different mentioned regions. It is quite evident that Moscow is toning down emphasis on western nations and is solidifying relations with nations in the Pacific and the Middle east. Moreover, it looks like the Kremlin is planning to increase defenses in strategic areas like the Okhotsk Sea near Japan.

Putin has laid special priority in isolating Russian foreign and trade policy with the Chinese, so as to decrease Russia’s economic dependence on Beijing. One of Russia’s main goals is to establish mutual nuclear deterrence with partner countries.

The Kremlin’s newfound aggression in the aftermath of the war is ringing warning bells for the US and its allies which now are in a bad state of affairs owing to an ongoing energy crisis and high inflation. Well, nothing solid could really be expected from the US President Biden when he himself is fighting increased resistance at home and is all set to leave the White House soon enough.