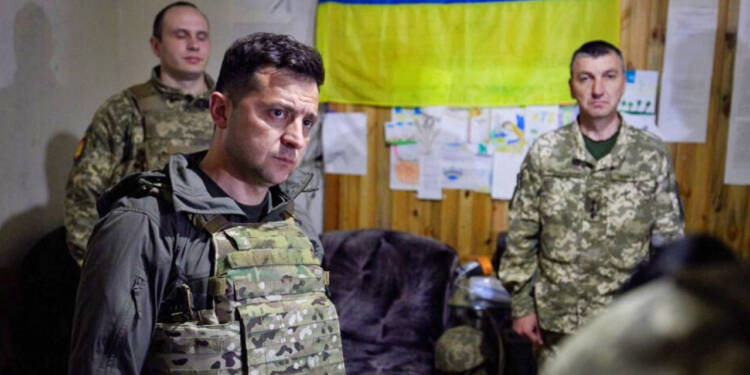 The chemistry between the Azov battalion and Volodymyr Zelensky is world known. However, in recent times, their relationship has started to become quite stormy.

As you may recall, Zelensky executed fifty of his own troops just a few weeks ago to prevent his dirty secrets from coming to light.

And now, he is wildly running after life of every Azov fighter who once sweated blood for Ukraine.

According to media reports, Ukrainian President Volodymyr Zelensky has warned authorities of the Donetsk People’s Republic (DPR) not to put Azov fighters on trial. Reportedly, Zelensky has demanded that detained members of the Azov Battalion must not face trial in Donbas otherwise he’ll refuse to have peace talks with Russia.

Denis Pushilin, the head of the Donetsk People’s Republic (DPR), then fired back at the Ukrainian President by claiming that his counterpart’s ultimatum will have “no influence” on upcoming legal proceedings.

It is as clear as daylight that Zelensky doesn’t really care for ‘peace’ or peace negotiations for that matter. He has been running away from confronting the Russian leader from day one. So, what has made Zelensky so unnerved now? Why does he not want Azov battalion fighters to be questioned or put on trial?

Read More: Did Ukraine use innocent civilians as human shield against Russia in the name of evacuation?

Actually, Zelensky and his close aides now fear that the fighters currently in Russian captivity might spill the beans about Zelensky’s war crimes in Eastern Ukraine.

Now, the panic within Kyiv is surreal as the interrogation of these Azov fighters and Ukrainian forces has started. These fighters may speak up the truth that Zelensky doesn’t want the world to hear.

Allegations against the Zelensky regime for violating human rights are already in abundance. The UN recently accused Ukraine of committing war crimes, a development that has compelled even the US-led Western mainstream media houses to vehemently turn against Zelensky.

The next choice Zelensky made was by far his worst mistake.

On July 29, Zelensky bombed the Olenivka detention centre in Donbas, and that too using US gifted HIMARS missiles, killing 50 Azov fighters and injuring many more in an effort to silence Azov fighters before Russian authorities could question them.

Zelensky would never want the fighters to acknowledge the war crimes that Ukraine has committed under the direction of high-ranking officials who act at his behest.

So, Ukraine is now asking Russia to treat these Azov fighters as Prisoners of War (PoW) and return them back to Ukraine.

It’s highly likely that the Zelensky regime might get these Azov fighters executed on the charges of “acting against national interests” and “surrendering before Russia.” Defying Kyiv’s diktats is already illegal for the Ukrainian fighters and soldiers. It was reported that Kyiv imprisoned those soldiers who laid down their weapons against the Russian Army. So, Zelensky would invoke the same desertion law to punish these fighters once they land again on Ukrainian soil.

So, Zelensky’s men are caught between a rock and a hard place. If they continue to be in Russia’s detention, they would eventually be executed by Russia. And if they are unfortunate enough to be sent back to Ukraine, they will face atrocities of greater proportion.

Dear Nationalists of Canada, Beware! You are a national security threat now

USA’s ambassador to Canada openly rejects Canada as an ally