Sweden has decided to elect a right-wing prime minister

Sweden is going to elect a new prime minister and it’s almost certain Magdalena Andersson is on her way out. Her stature among Swedish people is facing constant erosion. Whereas, her party, the Social Democrats is bound to fail this time. 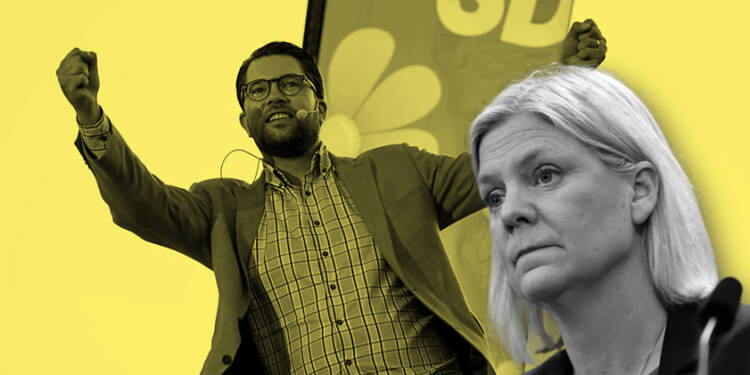 Sweden is all to go to the polls on Sept. 11 to elect 349 members of the parliament. The recent opinion polls indicate that the elections are expected to be a close call between the ruling left-wing and a revitalized right-wing opposition. Prime Minister Magdalena Andersson hopes to extend her party’s eight-year rule. But the opinion polls indicate she has run out of steam. At the moment, the Social Democrats are being outnumbered by the opposing Conservative parties. But, the sudden uptick in support of Right-wingers is sure to take your breath away.

The Swedish Parliament currently has eight political parties. Four left-leaning and four right-leaning. The ruling Social Democrats, the Green Party, the Left Party, and the Centre Party’s support has dwindled to 49.6% of the votes. In contrast, the right-wing Moderates, the Christian Democrats, the Liberals, and the far-right Sweden Democrats are polling at 49.3%. But, check out the recent RW support surge.

Ahead of the election, the Sweden Democrats now enjoy a four-point lead. Compared to the Social Democrats 17.4%, the Sweden Democrats are predicted to receive 21.5% of the vote. There should be no doubt that the right-wing party will climb to a kingmaking position in the upcoming elections if the current trend continues.

Now, let us get into the question that confuses many. If the Right-Wing wins, who’s going to be their leader?

Breaking all odds, the next PM of Sweden could be none other than SD leader Jimmie Akesson. In the last two decades, Akesson transformed into a significant critic of conventional politics. Moreover, the Swedish people have given him a lot of support. Furthermore, Voters see the Akesson-led RW govt, as a much better choice than Prime Minister Magdalena Andersson-led Social Democratic minority government.

A possible concern for the west?

The West would be in a lion’s den if the RW wins the upcoming parliamentary elections, which is almost certain. Because the Swedish RW is irate over liberal ideologues such as Migration. Moreover, the Swedish RW also had a very stormy relationship with Brussels.

The Swedish RW once made headlines for calling out ‘Swexit’ and their amicable relationship with Kurd people won’t sit well with Left-wing government’s current favourite Turkey.

The matter was a hot potato between Sweden and the EU until Sweden Democrats reversed their policy of calling for the country to follow Britain out of the EU.

The rising RW aspires to transform the EU from the inside. This means that by supporting the RW faction that is emerging within the Bloc, Swedish RW could spurt more tensions for Leftist Brussels.

Furthermore, Sweden Democrats have also been charged with being affectionate to Russia. If the Swedish Right wing reverses the decision on NATO, the ambitions of the west would crumble entirely.

Stockholm is about to become an apple of discord for the west. There should be no doubt that rather than Italy, the West needs to cold sweat about Sweden. NATO’s goal to thwart Russia via Sweden and the EU’s bonhomie with Sweden could meet a terrible end should Magdalena lose this September.

Alberta kicks Trudeau’s RCMP out of the park