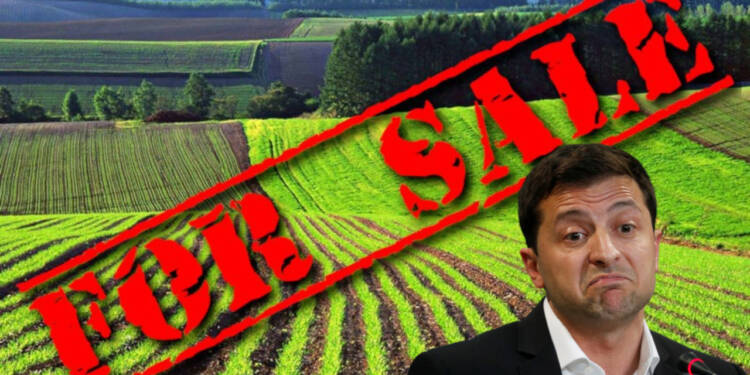 Prior to the beginning of the NATO-provoked war, Volodymyr Zelensky’s government had attempted to privatize a huge portion of the Ukrainian land. However, his attempt met a dead end after getting despised by Ukrainians.

But now, Ukraine has gone belly up and it is on the verge of a total collapse. So now, Mr. President is back with his ‘Privatisation’ drama, and that too in the name of ‘Job Creation’. That’s cute, isn’t it? But as we say, the devil lies in the details.

Zelensky may boast that all this is being done for post-war rehabilitation, but the truth is something else. In reality, Zelensky is likely lining his own coffers to depart Ukraine permanently.

As Russian aggression continues to blanket Ukraine, Volodymyr Zelensky has re-announced his plans to launch large-scale privatizations in Ukraine.

Recently, the Ukrainian parliament adopted draft No. 7451 on amendments to the law named “Privatization of State and Communal Property Act,” which was intended to simplify the privatization process.

Reportedly, Kyiv wants to organize large-scale privatization through online auctions. And, it is also looking to shorten the time for offline auctions, to make the procedure easier.

The Ukrainian Prime Minister Denys Shmyhal stressed that the sole purpose of the new legislation is to make sure privatization takes place as rapidly as possible for “job creations”.

But why is Zelensky all of a sudden worried about unemployment in his country?

Mr. President and his top officials are definitely up to something and most likely, they are filling their own pockets by selling public lands before eventually succumbing to the Russian aggression.

Ukraine wants to focus on the sale of “state and communal enterprises, real estate and land plots, whose value does not exceed $6.7 million.”

Zelensky is trying to make some quick bucks by selling hundreds of state-owned properties in midst of the chaotic situation because he knows that his chances of triumphing against Russia are very weak.

Any person with common sense would understand that Ukraine is completely destroyed and at this point in time, its leader’s sole focus should be on protecting the land. Rather than completely suspending his already despised plans to privatize state property and organizations, Zelensky wants to accelerate the whole process.

Ideally, extensive privatization generates billions of dollars. But how much revenue would Ukraine generate in total?

And honestly, due to zero trust in Ukraine’s transparency, be absolutely sure that this money won’t be used for post-war recovery.

Ukraine has already got billions of dollars in aid to fight against Russia. Accompanied by it, the post-war recovery fund for Ukraine is also in active discussions within the western world.

Zelensky is suddenly talking about privatising Ukrainian land to assist job development, despite the fact that he is aware that investors would never consider investing billions in a country that is embroiled in a war.

Now the question arises, Why?

Why is Zelensky suddenly talking about privatising Ukrainian land?

The answer lies in the conclusion of the Ukraine war.

Eastern Ukraine is completely under Russian siege. The western world has stopped providing aid to Ukraine. And most European nations have remained reluctant to provide new arms to Ukraine in the last two months.

Everything looks grim for Ukraine.

Kyiv understands very clearly that without support from the west, Ukraine will cease to exist. Hence, Mr. President and his top officials have started to pack their bags and fill their pockets before leaving their motherland.

Read More: Zelensky won’t be defeated by Russia, he will be trampled upon by Ukrainians

Ukraine has been labeled as one of the most corrupt nations in the world and old habits die hard. The huge revenue generated through the ‘large-scale privatizations’ would be in hands of Zelensky and what happens further with that money, no one would ever know.