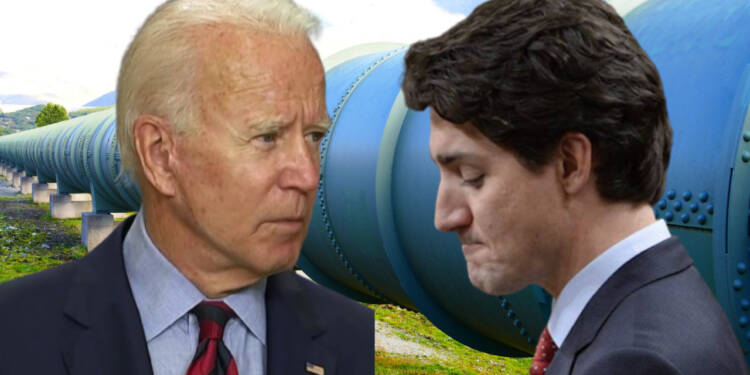 We at TFI have been hitting the nail on the head when we say Canada isn’t realising the facade of the bonhomie it shares with the US. Certainly, there have been a plethora of economic disagreements between the two nations. While shameless Canada is busy pleasing its American masters, Washington never gets tired of annoying its “true-blue friend.”

You see, Biden keeps on denting the Canadian economy in one or the other way. In a similar fashion, this time too, Biden snatches a project from Canada that could have helped it mint millions of dollars.

Anyway, the US has again driven Canada crazy. Washington is all set to shut down a Canadian project worth billions of dollars in its state of Wisconsin. It’s the Line 5 pipeline project that stretches from Superior, Wisconsin, to Sarnia in Ontario. The Line 5 pipeline is owned by a Calgary-based company Enbridge Inc. which will feel the pain of the shutdown.

However, the Line 5 pipeline got damaged beyond repair. Therefore, the US now wants the pipeline to completely shut down- a move that is aimed to allay the fears of an environmental catastrophe in the Great Lakes. Also, the 1953 pipeline is being opposed by the Bad River Band, a Native American band in northern Wisconsin, due to the possibility of a leak and the expiration of easements which are land use agreements between Enbridge and the tribe.

Read More: US controls Canada with a remote control, and Canada shamelessly allows it

Now, this unprecedented move must have left Canada foaming at the mouth for sure. After all, it will dent Canada’s money-minting machine. Apart from this, other impacts would include a spike in energy prices, including the propane that’s used to heat homes across much of the U.S. Midwest, as well as gasoline prices, which tested new highs across the continent throughout much of an inflation-ravaged summer.

“The economic and energy disruption and damage to Canada and the U.S. from a Line 5 pipeline shutdown would be widespread and significant,” Foreign Affairs Minister Melanie Joly said in a statement.

Enbridge submitted a motion to a U.S. district court in May asserting that attempts to halt the pipeline’s operations are illegal under federal law. Some of Bad River Band’s claims were up for dismissal in the motion.

The company said in a statement on Monday that it “remains open to resolving this matter amicably” and was pursuing permits to re-route Line 5 pipeline around the Bad River Reservation. The Bad River Band has not responded immediately.

Not to mention, just to weather the storm Canada invoked the 1977 pipeline treaty with the U.S. Well, this comes for the second time in less than a year now.

The treaty, which was invoked last October in the Michigan case, is expressly designed to ensure the uninterrupted operation of hydrocarbons through the U.S. The 1977 pipeline treaty governs the free flow of oil between Canada and the United States.

“The economic and energy disruption and damage to Canada and the U.S. from a Line 5 shutdown would be widespread and significant,” Joly said in a statement.

“This would impact energy prices, such as propane for heating homes and the price of gas at the pump. At a time when global inflation is making it hard on families to make ends meet, these are unacceptable outcomes.”

Trudeau, it seems, never fails to demonstrate the truth that no man is an island. But at least he ought to be smart enough to choose the right horse. He has always suffered from his full loyalty to his American masters. However, The United States doesn’t even give a second thought before hurting Canada’s interests.