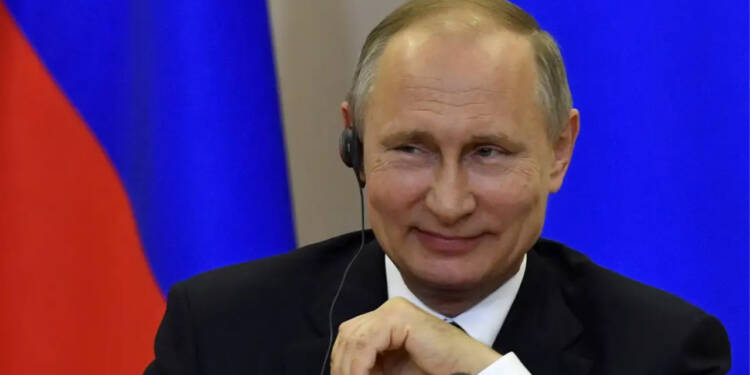 No one would have expected the sudden rise of Moscow in the current geopolitical scenario. Analysts predicted total devastation of the Russian economy after the west imposed a plethora of sanctions amid Moscow’s special operation in Ukraine.

Although Putin’s advanced planning and hold on the energy supply of Europe helped the Kremlin sail through sanctions. The ruble which witnessed a record fall in the starting days of the war staged a comeback as Russia’s energy exports in the local currency rose.

The IMF, reportedly a pro-west organization, issued statements that solidified the trust in the Russian economy. The International Monetary Fund’s latest World Economic Outlook upgraded Russia’s GDP estimate for this year by a remarkable 2.5 percentage points.

It is only natural for the Russian economy to shrink after being sanctioned by half of the world. Although, the extent of damage is not as much as expected. Ironically the expected fall in some cases is less than many non-sanctioned economies.

The Russians recently predicted a fall of around 3% in the economy. Russian economy will shrink by less than 3% in 2022, a much shallower contraction than initially expected, while inflation will be below earlier projections, First Deputy Prime Minister Andrei Belousov said on Monday.

Read More: Bolsonaro comes out in open support of Putin to save Russia’s World Bank and IMF membership

Belousov said Russia’s gross domestic product (GDP) would fall by “a little more than 2%” this year, followed by a decline of “no more than 1%” in 2023.

Belousov stated that the government did not observe any indications that the state of the labor market was deteriorating, despite unprecedented sanctions and numerous foreign companies leaving Russia. However, there was a chance that it might, he added.

According to the Eikon database, the unemployment rate was 3.9% in June, the lowest level since the statistics service began releasing the data in 1992.

The Sun sets on the west

Global financial dynamics is not entirely a level playing field, as a result, the repercussions are also not constant everywhere. Someone’s fall is someone’s rise. This phenomenon has been observed for as long as globalization has existed.

For Example, the great depression in 1929 that engulfed the USA and most of Europe was actually a not-so-bad for South Asia and the Indo-pacific region.

Similarly, the rise of eastern powers like India, Russia and China would reportedly shun the erstwhile western superpowers. Europe’s energy dependence on Russia has now made it a prisoner if they want a continued supply of gas for the industry.

The UK is witnessing the worst economic situation in 300 years. In its annual Blue Book revisions released Monday, the Office for National Statistics said the economy contracted by 11%, rather than the 9.3% it previously estimated. That makes it the worst drop since the Great Frost of 1709.

Germany, the largest economy in Europe and the biggest beneficiary of Russian gas is on the verge of industrialization owing to unavailability of gas. Leaders in Berlin are getting accustomed to growing anxieties with winters nearing.

And well, the master orchestrator of the events that eventually backfired – the Democrat President of the US – Joe Biden has registered his name as the President who initiated the decline of the US hegemony.

Biden’s policies have triggered record-high inflation in the country. Washington entered recession in the last quarter, something that is terribly shocking for an economy as big as the US.

Biden is now scheming to turn Europe into a battlefield after he upgraded the nuclear weapons systems in many locations across the continent. Washington is thus effectively provoking a war between Europe and Russia, while it sits comfortably on the sidelines and benefits from arms supplies.

It is high time that European leaders should think of themselves. It would be in their interest to distance themselves from Washington and forge closer ties to Moscow to ensure peace, security and most importantly a confirmed and regular supply of gas to power their industries and keep their houses warm.

32 Popular Arrow Quotes On The Internet Ever