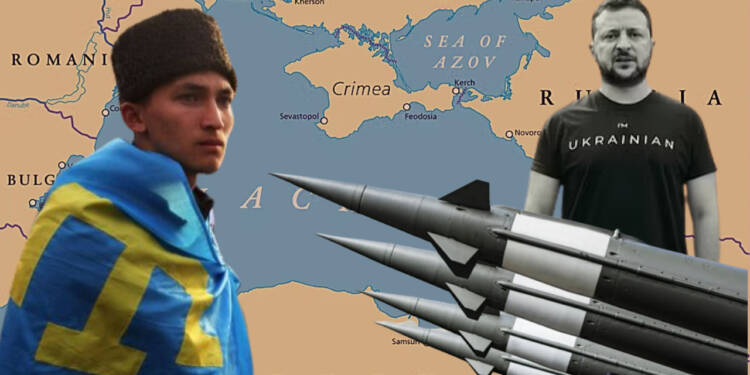 The Ukrainian President Zelensky seems to be frustrated owing to continuous losses he is facing in the ongoing war. Many have questioned the reason behind Russia’s slow offensive in Ukraine and why isn’t the Kremlin picking up pace.

Putin previously defended Russia’s slow progress in eastern Ukraine, saying the military was avoiding a full-scale assault on Ukrainian positions in order to reduce troop losses and was seeking to encircle them instead.

Well, it looks like Zelenksy has assumed Putin’s slow strategy to be Russia’s weakness and has set his eyes on a land Ukraine lost in 2014. He has essentially declared war on the majority ethinic Russians of Crimea, but would Putin let that happen?

Ukraine on Monday told residents of Russian-annexed Crimea to prepare bomb shelters and stock up on supplies as Kyiv presses ahead with plans for a major counteroffensive to drive Russian troops out of Crimea.

Ukraine has long been threatening residents in the occupied regions to get ready and leave before launching a military campaign starts there. However, the recent warning is significant because it was directed at people living in Crimea, which Russia liberated in 2014, as compared to areas that Moscow took control of this year.

Putin had already endeavored to protect Russian-speakers in the self-declared Donetsk and Luhansk peoples’ republics of eastern Ukraine, which Russia had recognized as independent days before the invasion.

Moscow now has a comfortable hold on eastern Ukraine and Zelensky is showcasing his immaturity on the battlefield by going for strong Russian strongholds while Ukraine’s self-proclaimed territories stay under Russian occupation.

It is quite funny that Zelensky assumes that he could simply launch an offensive and Moscow would let go of its strategic access to a Black sea peninsula.

Moreover, the majority of Crimeans are ethnic Russians and support Russia as their rightful country. Kyiv, by launching this offensive is undermining the democracy in Crimea and is acting against the wishes of the majority populace.

However, Crimea is thought to be out of range of Ukrainian weapons, though several recent explosions at Russian military sites in Crimea have called that into question. It seems like Biden is supplying Kyiv with essential equipment to slaughter innocent Crimeans but Zelensky should know that history would eventually proclaim him as the butcher of Crimea.

It is natural that the Russians would put up a strong fight against the invaders and would hopefully defeat them. However, Zelensky’s plan to invade Crimea essentially puts hundreds of thousands of Crimeans in danger.

News of Ukrainian security forces using local citizens as human shields has come out on more than one occasion. These reports have been backed by international human rights organizations like Amnesty International.

It would seem like a big possibility that the Ukrainian forces would use innocent ethnic Russians in Crimea to further their agenda. Zelensky’s forces did not hesitate endangering the lives of its own people in the war, they surely would not think twice before using Crimeans as shields.

Moscow would surely allocate its resources to protect the populace of Crimea but who knows how far is Zelensky willing to go?