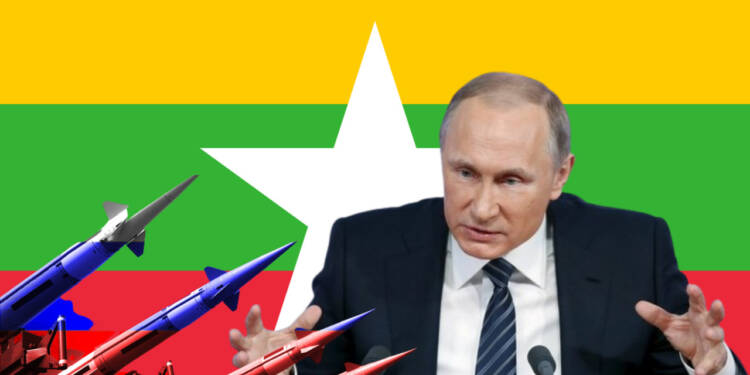 Myanmar is becoming an increasingly significant battleground between world powers. The nation has been in the news ever since the Junta overthrew the democratically elected government and assumed power for itself.

The Junta had previously been isolated and was trying to do right with powerful nations that could assist it gain some global legitimacy. However, the leaders of the military regime took a completely anti-west detour when they supported Russia’s invasion of Ukraine in February.

The Myanmar military regime and Russian state-owned nuclear corporation Rosatom have signed a roadmap for further atomic energy cooperation including the possible implementation of a modular reactor project in Myanmar.

The agreement was signed on Tuesday on the sidelines of the Eastern Economic Forum (EEF-2022) in Vladivostok, Russia, where regime chief Min Aung Hlaing has been ruling since Sunday to attend the forum.

In an attempt to occupy a nuclear reactor project, Myanmar initiated discussions with the Kremlin in 1999. In January 2002, the then-military regime announced plans to construct a nuclear research reactor for “peaceful purposes.” Khin Maung Win, the deputy foreign minister at the time, stated that Myanmar had a “longstanding interest in nuclear energy for peaceful purposes.”

Even after subsequent talks spanning through many years, the deal could not materialize. However, the deal picked up pace amid the ongoing conflict. Russia’s renewed interest in the region came about as a result of Moscow wanting to ramp up its influence around the world.

Nevertheless, the whole scenario became quite beneficial for Myanmar which now would get what it has always craved.

US Wary of a Budding Friendship

The USA already feels threatened owing to the rise of the powerful block consisting of India, China and Russia. The rise of Myanmar poses a threat to the US’ interest in the indo pacific and that is exactly why Washington has opened up its playbook to stop the friendship from materializing.

Washington has reportedly ordered an organization under its influence – the FATF to place Myanmar in its blacklist.

FATF, an intergovernmental body established in 1989, describes itself as a “global money laundering and terrorist financing watchdog,” which helps to coordinate international efforts “to prevent organized crime, corruption, and terrorism.”

Now it is indeed a big deal because being a part of the blacklist essentially disallows a state to partake in global economic activities.

Military-ruled Myanmar could soon join North Korea and Iran on a key international financial blacklist, dealing a blow to the military junta’s hopes of stabilizing the country’s economy.

The FATF would however quote the Junta’s “unsatisfactory progress” as a reason for its inclusion in the very isolated group.

“The lack of progress shown by the junta means the plenary would find it difficult to justify not moving Myanmar to blacklist,” An Asian diplomat told Nikkie.

However, all the reasons are on the surface. The real reason behind the whole sham grows out of the US’ envy towards a budding friendship between Russia and Myanmar.