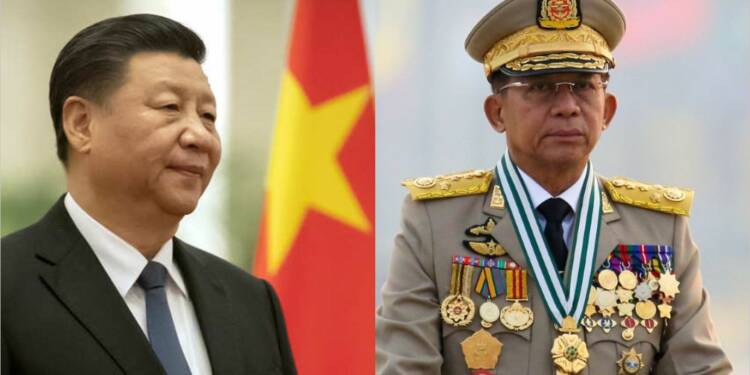 A deadly power game between Myanmar Junta and Myanmar’s rebel groups is unfolding in the country. Myanmar’s army has been steering the country since it overthrew the civil government on February 1, 2021. However, the military is facing stern pushback from the rebel groups as well as anti-coup protesters now, who have joined hands to ouster the military regime.

From long-established ethnic insurgent groups to a slew of newly formed civil defence groups, Myanmar Junta is witnessing resistance in every part of the country. The rebels gunned down at least 23 military personnel near the Chinese border recently. The urban guerrillas have stepped up their offense against security forces and their suspected informants.

The country is reeling under a massive Covid-19 surge and the healthcare infrastructure is overwhelmed. The pandemic has aggravated Junta’s tensions, and now China is looking all set to further weaken Junta’s already fragile sway over the country by strengthening the rebel groups. As per a report by Strait Times, Beijing has quietly shipped thousands of vaccines, medical workers, and construction materials for quarantine centres to help the rebel groups grappling with the pandemic.

Read More: Russia could be providing Sukhoi-57 fighter jets to the Philippines, Vietnam, Malaysia, Indonesia and Myanmar to take on the China challenge

The Kachin Independence Army (KIA) has confirmed the reports of receiving aid from across the porous border with China. A KIA spokesperson said that Chinese Red Cross staff “come to help us sometimes… to help us prevent the Covid-19 pandemic.” The KIA is Junta’s sworn enemy and has been battling the military over the drugs trade, natural resources and autonomy.

Rebel groups such as the Shan State Progress Party and the Ta’ang National Liberation Army have also received medical aid from China. China is providing the rebel groups with vaccines to inoculate people living inside territories under their control, thus assisting them to further cement their sway in the country, especially when the military regime is failing the masses.

For instance, the KIA has so far inoculated about 10 thousand people in their Laiza headquarters. Similarly, the Shan State Progress Party has provided vaccine jabs to more than one thousand people. Interestingly, Beijing has been helping out these rebel groups unobtrusively to delude the Junta and security officials.

China is heavily dependent on the rare earth minerals that it extracts from Myanmar and thus, any fallout with the Junta could easily jeopardize its trade with the country. China relies on Myanmar for around 50% of its heavy rare earth feedstock. Hence, the Chinese government needs to keep the Myanmar Junta in good humour. However, the rising cachet of the rebel groups is forcing the Chinese administration into having second thoughts.

The news of China engaging with the rebel groups is hardly encouraging for the Myanmar army. Junta is already growing closer to Russia in its bid to do away with excessive reliance on China, and Russia has also shown signs of intensifying its engagement with the China’s southern neighbour.

The visit of the Myanmar air force chief to Moscow in June this year alluded China’s waning influence over the country. The tour included a visit to HeliRussia, the country’s top helicopter exhibition; and discussions with Russian officials for planned procurement of military hardware had also taken place.

Russian Defence Minister Sergei Shoigu had told Myanmar’s junta leader Senior General Min Aung Hlaing that Moscow is committed to strengthening military ties with Myanmar. “We are determined to continue our efforts to strengthen bilateral ties based on the mutual understanding, respect and trust that have been established between our countries,” Sergei Shoigu was quoted as saying by Russian state media.

Growing ties between Russia and Myanmar Junta is bound to spell troubles for Beijing. The border closure with Myanmar is already hurting the Chinese economy, and now Junta’s diplomatic offense against China will only worsen the tensions. China’s tacit support to anti-Junta rebel groups could also become a bottleneck issue in the China-Myanmar relations.

China had firstly placed its bet on the military regime in Myanmar to usurp the rare earth minerals and help its sinking BRI project in the country. However, as the military regime now embraces Russian arms and investments to shed off China’s influence, China has swiftly moved to win the confidence of Myanmar’s anti-Junta rebel groups. This move will likely put China at loggerheads with the Myanmar Junta, which could further stir troubles for China’s exponential investments and trade opportunities in the country.